This terminal command sets the computer to sleep mode:

Here is a bash script that when run, without an argument, schedules the system to wake in 20 minutes and then puts it to sleep immediately. Or you can supply, as an argument, the number of minutes you want it to sleep before it wakes the system. Unfortunately the OS X command line utility pmset, which does the wake scheduling and sleeping, requires elevated privileges. Meaning the command must be run using sudo as shown in the example output below.

In the example below, the script was saved as sleepwake and then in Terminal made executable using chmod u+x sleepwake, then run just as sleepwake to show the internal help message. (Note: The current working directory I'm in is in my $PATH. See Examples Note:, further below, for additional information.)

In a Terminal, type the following, pressing Enter after each command:

Copy and paste the code below into the opened, blank, document.

Now save the document, then close it.

Execute the sleepwake command without using sudo, to see that the internal help displays.

Then test it for a minute with the following command:

Type in your password when prompted, and press Enter.

The system will now sleep for one minute. 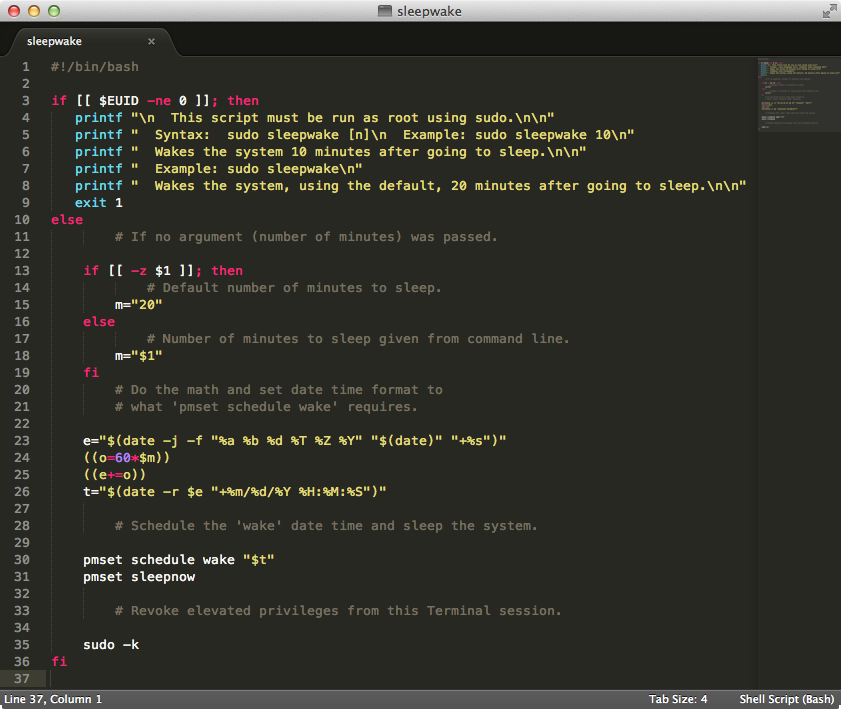 The # Do the math... comment in the script means the code block directly below it converts the current date time to seconds since Epoch, in order to add the number of seconds in minutes to sleep to the current date time, and then convert back in order to then have a date time in the format that pmset schedule wake requires and this will be the date time x number of minutes from now, being the date time of execution, incremented either the default 20 minutes or the number of minutes passed as an argument on the command line. Wow! :)

Once the date time to wake has been scheduled and the system put to sleep, it can be woken ahead of schedule if you need to access the system before the scheduled wake date time by the usual means, clicking the mouse or using the keyboard, etc.

For additional information about pmset, see it's man page.

Not the answer you're looking for? Browse other questions tagged terminal mac sleep-wake .

5
Disable sleep mode for a specific app?
8
How do I create an AppleScript that will quit an application at a specific time and then put the computer to sleep?
1
Takes a long time for my macbook pro to wake from sleep
6
Switch from sleep to hibernate after set time
0
Waking the macbook from sleep
0
Close all programs after 1min without user interaction
4
MacBook taking a long time to wake from sleep after Sierra
4
What do I need to do to get my Mac to sleep properly?