How can I change the title of a boot image?

When I plug the hard drive into a Mac Mini, and turn it on holding down the Alt key, I get the option to select which boot device to use. However both my bootable images are named "Mac OS X Install DVD".

How would I change the name of the bootable image?

I have already tried changing the partition names but this has no effect.

Note: I originally asked this on SuperUser, but upon discovering this site, I asked it here also.

Edit: Here are some related pictures: 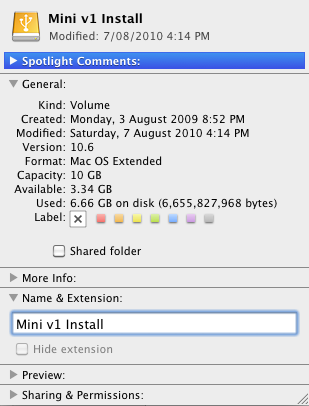 The Partition in Finder

This is an older post, but I came across it today and figured I'd share what I found.

The 'bless' command seems to make this work. First make sure the disk is mounted, find out which folder it is mounted to, and:

Whatever you put for the label is what should show up at the choose disk screen when holding option during a boot.

Note that you'll probably want to do this in addition to renaming in Finder or Get Info just to keep them somewhat in sync and make them easier to identify in either case.

Note that since a firmware update that came in with High Sierra (late 2017) the root of the drive is now a secondary source for the disk label files. The primary source is within a directory called:

For example, to hit both sources:

Unless I'm totally misunderstanding your question, this is pretty simple. You can change the volume name just by right clicking it in finder, choosing "Get Info", and modifying the "name and extension" field. Or slow clicking twice on the name of the volume as it appears on the desktop, and editing it just like any other file name... I do this all the time with bootable volumes and it works just fine.

Your installer doesn't have to be called "Mac OS X Install DVD". The installer doesn't care what you call it. Name one "Crap Bag" and the other one "Princess Consuela Banana Hammock"... no one will care and OS X will still install just fine.

I just tried this with a USB stick I created that has the 10.6.3 installer on it. I had already changed the name from "Mac OS X Install DVD" to "10.6.3 Installer minus Optional". I just changed it to "10.6.3 Banana Hammock" and when I booted with alt, that is what was displayed.

There must be something not explained here that is causing this... maybe partition schemes other than GPT don't work this way?

What method did you use to put the images on the bootable partitions? I ask because I'm wondering if you just copied the images themselves rather than cloning or restoring them to the partitions.

If this is the case, I would think you could change the name by mounting the image in OS X, and then changing the volume name (the name of the volume that shows up on the desktop or in disk utility) that was mounted from the dmg or iso.

Below are the steps I used to create my installer image. The main difference is Carbon Copy Cloner. It may not work any better, but at this point it may be worth a try since mine has the behavior you would like to see.

Afterwards, I am able to change the name of the flash volume, and whatever I change it to is what shows up in the boot menu.

Do you ever try use rEFit:
rEFIt is a boot menu and maintenance toolkit for EFI-based machines

Given that you can't change the name of the disk images, what you need to do is be able to tell which disk image is which. To what you're doing now, you'll need to add one extra step…

devguydavid's answer definitely leads in the right direction, but probably only works for older installer media.

The other David's answer likely works for contemporary installer media, but I haven't verified it.

But what about boot volumes for permanant operating systems or non-macOS installers?

To label any EFI boot volume, the bless command must be pointed to the folder containing the bootloader—boot.efi or bootx64.efi—in an EFI system partition (which may be the actual OS volume, or a separate volume dedicated to the task).

The exact location of the bootloader is ultimately arbitrary (i.e., one could move it around by changing settings in NVRAM), but it is typically one of a handful of locations, depending on the OS.

Run through the following conditions for the boot volume you want to change, then take note of the folder containing boot.efi or bootx64.efi.

OK! Knowling the location of the bootloader, we can now use bless to add or change its Boot Manager label:

This creates the files .disk_label and .disk_label_2x in the bootloader folder.

The reason this process is so complicated is that the labels are actually stored prerendered in an extremely simple image format. This obviates the need for font rendering in the preboot environment.

Not the answer you're looking for? Browse other questions tagged snow-leopard partition boot .

2
How to distinguish multiple OS X installations from each other in the bootloader?
1
MacBook Air with Bootcamp, wanting removable Linux devices without rEFInd
1
How to change ISO volume label on OS X?

3
How can I get boot details when booting from Snow Leopard DVD?
1
Install Boot Camp gone bad -- installed windows on a wrong drive
4
How can I create a Mac boot disk?
0
How can I log in again after downgrading a 1st-gen MacBook Air from Lion to Snow Leopard?
4
How can I add an HFS+ partition to an MBR-partitioned external drive
0
Splitting Partition On External Drive
1
How to make macOS APFS Container show up in the boot menu again?
2
Messed Up APFS/Bootcamp Partition Table