I'm trying to use screencapture from the terminal, when logged in over ssh, to a mac that has no screen attached. I can screen share to the machine, so I'd like to capture the same display.

However when I try it, I don't get an image file.

None of which work... (note that the last attempt is getting the PID for loginwindow.app and attaching the screencapture process to it as suggested by the OS X man page.)

I didn't mention that the machine doesn't have a screen attached, (I usually connect to it via VNC/Screen Sharing) I jumped to another machine on that network and the command works ok, (of course I guess!)

I should also mention that, as I'm logged in on the remote machine on the same account as the local GUI session, the first version of the command works fine.

In fact, just the following without all the launchctl stuff works fine:

However, I still need to figure out how to screencapture on the headless machine, ie. capture the same display I'd see over screen sharing.

I tried doing the screencapture while another machine had a screen sharing session open on the same user account as the ssh session, no dice.

However, interestingly enough I was in the same room as all the boxes in question and the target box made the "shutter" sound when I ran the screencapture remotely.

Looks like it's not possible to screen grab on a displayless mac, without some serious additional work, I will VNC to it remotely instead.

What is you create an Automator script to take a screen capture, and then run that using the terminal?

Similar to what is described in this TUAW article, however, without the part that mails the screen capture to you. 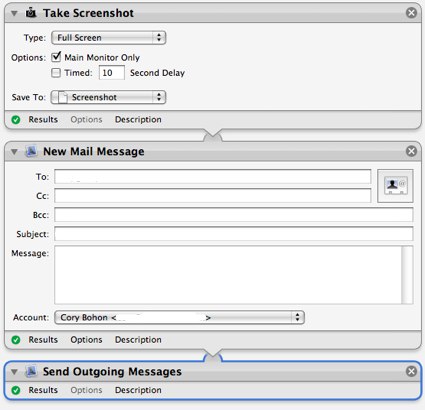 Save the Automator script as an application, SSH in, and run open /path/to/the/automator.app

Not the answer you're looking for? Browse other questions tagged terminal ssh screen-capture .

11
How do I run a GUI app via SSH?
1
VNC via SSH Problem
1
Is it possible to terminal login remotely (outside local network) to my mac at home via SSH + VPN?
4
Login user when connecting via ssh on MacOS
2
How to ssh and remotely manage GUIs on my iMac with Remote Login/Management?
1
ssh from my mac hangs after authenticating anywhere, regardless of app. It's definitely the mac. Ideas?
1
Git stored credentials work locally but don't have effect if logged into the machine via SSH