I had purchased an iPhone 5c in January last year, and recently it had an error with apps being updated. Initial error was that some apps being updating were stuck at some point, and when I tried restarting the phone, sometimes the apps disappeared from the phone (got deleted, or hidden from home screen).

Later, recently I tried (on Windows 10, Itunes) refreshing the phone by first backing up the phone, and then updating it to latest ios version, and then backing it up again, and the restoring it to it's factory default, and then restoring it from the itunes backup. When the phone restarted after backup, the apps background was all yellow!

Here's a screenshot from my iphone 5c home screen. How can I fix this? 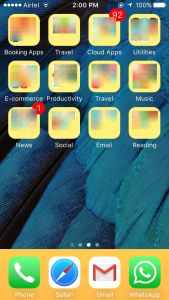