I have an old Macbook Pro for which I bought a new SSD and replaced the HDD with the SSD. Can't go further, see below.

I really don't know what to do. I could

Only accessible button "Erase" (no Partition) to:

retrying it doesn't work again: the mbp pauses for 30" at 'Unmounting Disk' and then:

The error message may indicate that the SSD contains an MBR which can't be properly repartitioned to a GUID partition table.

I recommend to dd the partition table with zeros:

Now retry to partition your SSD.

There are three ways to proceed:

The last is likely the cheapest solution since you just need an 8 GB drive and some time and possibly an internet connection.

The best thing is to be systematic and change one thing at a time, taking notes. Why not reseat the HDD and see that the Mac boots or not. Then reseat the SSD. At that point, you'll have a repeatable scenario and can go about building up something that works or know that the Mac needs hardware service or a new cable perhaps or just had a failure at the same time as you swapped unrelated hardware.

Since you are booting off a Recovery/Install USB you should have no problems erasing and partitioning your drive for use in your MBP.

There are a couple things that could be the issue here:

If you have a USB enclosure, you can try formatting and partitioning the drive attached to USB. If it fails there - you know it's the drive. If it works, then the issue is with your MBP (again, most likely the cable). I use this adapter from Anker when working with "questionable" drives as it supports both 2.5" (laptop) and 3.5" (desktop) drives. 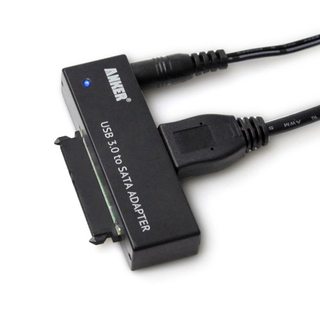 Not the answer you're looking for? Browse other questions tagged macbook-pro hard-drive macos partition ssd .