It's a while some random files with .download extension are emerging inside my download folder and I can't find what are these and what creates them, even I can't open them.

And when I get their info it's like this: 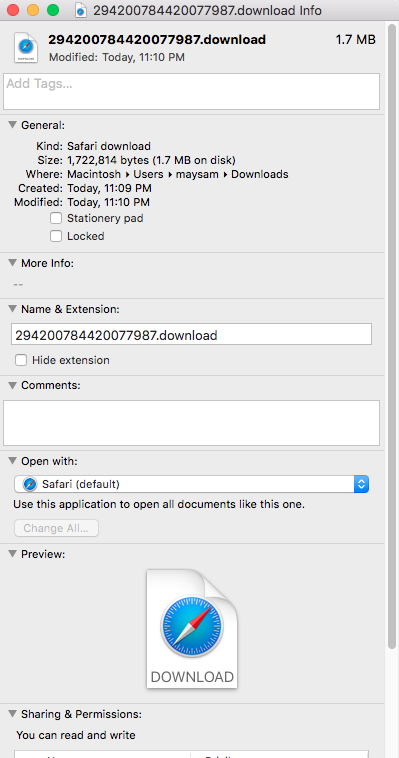 These .download files are basically download-in-progress files that have been created by Safari while performing a download. Once download is completed (so all the file blocks are retrieved) the extension is removed and the file becomes usable. Sometimes, these files remain as they are because downloads are interrupted by phenomena like power loss or just simply force quit of Safari while the download is being executed. Your case is pretty weird, but it's nothing you should worry about. A thing you could do is to clear the browser cache, so that Safari totally "forgets" about these downloads and stops attempting to create .download files.

Apparently, Telegram Desktop generates these files during "failed" searches when using the @gif command. The ones that Telegram generates are easily identified by being named with a series of 18 digits (e.g 532576936841446647.download), usually similar to one another, and always at zero-bytes length.

You can replicate the issue by trying some @gif searches after removing all files and seeing them being generated again.

They're safe to be removed; watch out not to remove the Safari ones, though, unless you'd like to restart your ongoing downloads.

Not the answer you're looking for? Browse other questions tagged finder safari data-transfer .

1
Clear thumbnails for renamed files
2
External drive error while moving files, now folder is inaccessible from Finder
1
Automatically categorize downloads?
8
Prevent Spam Downloads on Safari
3
How can I find out which Automator folder actions are attached to a folder?
0
Extracting files from partial downloads on Mac