How can I backup a VirtualBox VM with TimeMachine

I've read lots of different things about using TimeMachine with VirtualBox, but I haven't been able to find a very clear answer about what an acceptable configuration is. Some folks say "include up the whole virtual disk", some say "use snapshots and include everything except the virtual disk", and other people say "forget TimeMachine, create a separate partition on you backup drive, and export you VMs manually". I've read that including the whole VBox vdi / vdmk will cause TimeMachine to write the whole disk each time something changes, filling up the TimeMachine backup & wiping out all of the incremental backup history.

Most of the things I've read are a few years old too. I'm wondering if anyone has any new advice on this. What is the best way to back up VirtualBox VMs using TimeMachine? Is it even a task worth messing with, or is manually backing up the better option?

I have an answer, it's not the answer but it just recently saved my posterior when my iMac's HDD crashed a few weeks ago so I thought I would share. It's not a short read, but I think it can help.

There are many issues around VM's that can cause headaches for backup strategies - size of the VDI files, snapshots, backup time, etc. Consequently, I decided to chart my own path here to make things simplier.

I avoid the "putting all your eggs in one basket" strategy. What this means is that while I have a VM running FreeBSD for web development, what get's developed is nowhere on the VM. Here's a map of what my environment looks like: 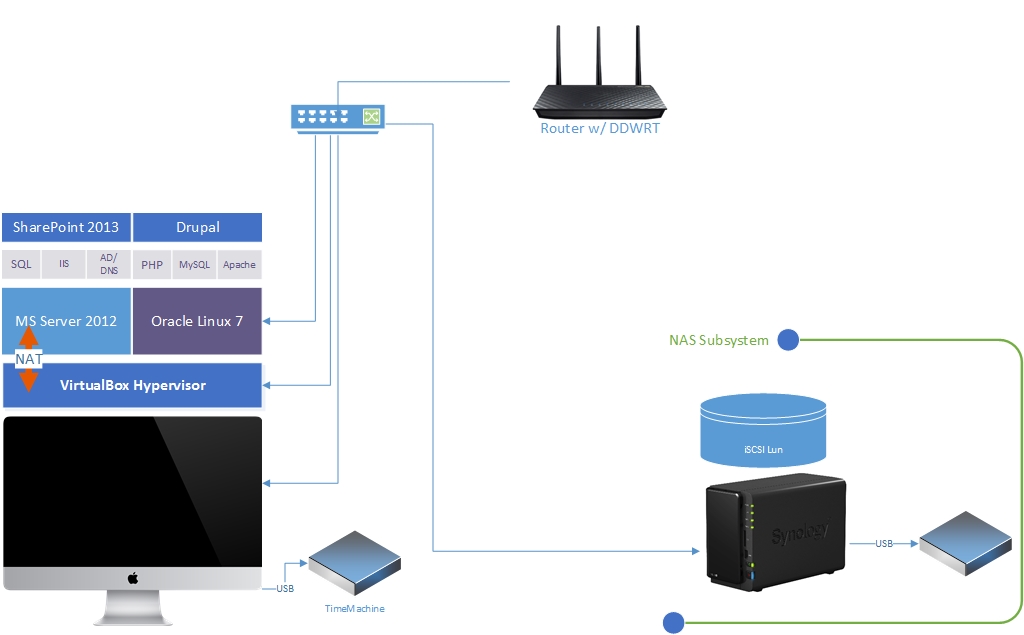 The graphic needs to be updated because I no longer run Oracle Linux 7 as I have switched to FreeBSD 10-2. I also have 4 USB drives attached to the Synology, not just one. But those are minor and the concepts are still exactly the same. Following is how I put it all together...

My environment consists of my

Because I have an iSCSI target mapped to my FreeBSD VM, anything I do is changed on the Synology, not the VM itself. As far as FreeBSD is concerned, it's just another mount point. In this case, I created a mount point

Why iSCSI? iSCSI is block level, not file level. As far as the OS can tell, you have attached another hard disk to your OS. You format and partition it the same way you would any drive you added to your system.

I then changed the DocumentRoot in httpd.conf to the aforementioned directory. Now, if you point your browser to the web server being hosted on my iMac, all the files are coming from the Synology and just passing through the VM. If I write new code, it's on the Synology.

Once I created the FreeBSD VM the way I liked it, I immediately archived a copy and put it on the Synology and on a USB stick. It was only 4GB, by the way.

I tested out the restore procedure by deleting the VM on my iMac and then copying it back to my iMac's VM directory. The trick is, instead of Importing/Exporting, you just "Add" it to VirtualBox and "Open" the .vbox file of the machine you copied over. 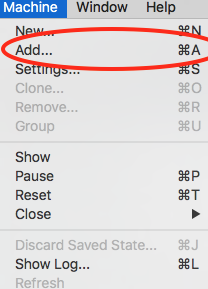 Now, my FreeBSD image was only 4GB and it never changes - unless of course I do an update. So, there isn't a need to back this up with Time Machine (unless I want to) because it only changes when I do an OS update.

The Synology is configured with a RAID 1, so the disks are mirrored. If one fails, then I still have the other; that my first level of data protection. I also have a daily backup going to a USB drive; that's my second level. I also do a daily directory snapshot using tar and mysqldump that's cron'd (on the Synology); third level. Synology has the ability to sync to cloud providers so in effect, if I set this up, there is now 4 levels of data protection available to me. Buy another NAS and use rsync...5 levels...and so on....

So earlier I said that this saved my bacon when my HDD crashed. Because my data existed on another drive, it was safe. I had my VM image backed up in two places so that was at the ready.

When I copied my VM back to my new iMac, once I loaded it up, it knew where the iSCSI target was and immediately went to work. I restored in less than 10 minutes total and that's including the time to find and copy the VM master image over to my new iMac.

But that's not where it saved my bacon...

I chose to upgrade to a 1TB SSD and delivery would take 2 days. I couldn't be down for two days, so I copied the VM to my Surface Pro 3, loaded it up, and because the VM "knew" where the Synology iSCSI target was, I was back up in business in 10 mins on a completely different computer.

You don't need an external NAS

Ok, so maybe my setup is a bit overkill with an NAS and iSCSI. However, there is nothing to prevent you from setting up a "shared directory" on your Mac and sharing it via NFS and mounting it on your VM. Remember, the VM is setup to be it's own node on the network; it has no idea that it's looping back to the shared drive where it's getting it's data from. With this setup you can still get the benefit of the VM never changing and only backing up what has changed which would be what's in the directory being shared via NFS.

I have always subscribed to the philosophy that data protection is not a product or service you buy; it's a strategy you employ. I found that relying on one thing (i.e. Time Machine) is a disaster waiting to happen. By building this as levels of protection I can be very efficient as well as highly backed up incase of disaster. It also allows me to be extremely flexible and "rapid" in coming back online.

It's pretty easy to use Time Machine to go in and delete all backups of a specific file, so I say - let it back up your machine and gather some data.

A back of the envelope calculation would show that in a month - you would have 24 hourly backups of the VM files, 31 daily backups. So if each backup makes a completely new image of the entire drive image - you'd have 55x the storage on Time Machine as the storage on your Mac.

If you make 20 GB of drive space total from Virtual Box VM, that's 1.1 TB on the backup. Not insignificant, but not a worry at all if you have 3+ TB free space to experiment with.

Then after a few days, you could use a tool like BackupLoupe to estimate how long it will take for the drive to fill and inspect whether your VM are using space efficiently or if its causing delays in the backup completion and/or even making a viable backup (you'd have to restore the image to test).

Just make sure the virtual box folders aren't on your excluded backup list (open system preferences-> time machine-> options) and time machine will do the rest.

EDIT: Time Machine backups files at the file level so if you change a single bit on a 30GB *.vdi file Time machine will make a complete copy of the new file as well as storing the old, so yes your assumption the TC will duplicate lots of data is correct, but as additional space is required older version will be overwritten. I would imagine if your TC drive is at least twice your OS X drive you should never have a conflict

As for VM files being corrupted, if you power off the VMs correctly(not save), then you should be fine.

See this VMWare link, its applicable to Virtual Box. As a side note the only time I've ever had a problem restoring a VM from backup or moving a VM is when it was in a saved state during the move, that seems to mess them up everytime.

Not the answer you're looking for? Browse other questions tagged macos time-machine virtualbox .