What does "slide to upgrade" do?

On iOS 9, after restoring from a backup, a screen comes up that says "slide to upgrade." 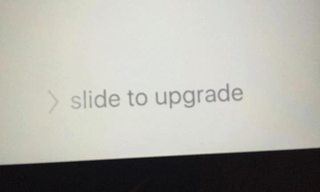 This doesn't update your iOS firmware, right? I imagine it just prepares your backup for iOS 9. Is this correct? I have scoured Apple's support articles, Reddit, and the likes. All I can find is information about a bug related to the slide to upgrade screen.

I just bought an iPhone SE. It came pre-installed with iOS 9.3.2. I set it up from an iPhone 5s iOS 8.1 iTunes backup. When the restore was complete, I was greeted with the "slide to upgrade" message. I slid it, and a loading bar with the Apple logo was displayed. When it was finished loading, a message appeared saying "upgrade complete." When the setup was finished, I went into Settings; it was still on iOS 9.3.2. It is now asking me to update to iOS 9.3.3.

Thus, "slide to upgrade" does not update your iOS firmware to the latest version, it likely just prepares the old backup data for use with with iOS 9.

Great question! For anyone worried about this I want to confirm that "Slide to upgrade" does NOT update iOS (Apple really should change that message to avoid misunderstandings).

If you restore, on any device that can accept that iOS, you will have to update too. I imagine this is one of the reasons why 'they' say not to restore a jailbroken phone [not that I've ever had one].

I've never actually seen the Slide to Upgrade, as I don't do upgrades/restores OTA, always connected to iTunes, but on iTunes it wants to fetch the update before it will let you do anything else at all.

The only exception would be an iPhone 4, etc, which has reached end of life.

Following comments that you can revert to an earlier version by downloading the .ipsw file - this is always going to be the case for a few weeks after an update, but will always timeout & leave an upgrade as the only alternative most of the time - research shows me that indeed today is that day (6 April 2016) for 9.2.1 - Following release of iOS 9.3 & 9.3.1, Apple stops signing iOS 9.2.1

2
Restore from backup on iPod touch issues
2
Cannot update iPad 1 to iOS 4.3 or higher
0
iTunes refuses to Restore home screen arrangement from Backup
10
How to restore individual app data from iCloud while keeping all the other apps installed and new data created since the last iCloud backup?
4
What possible data can I lose if I backup iPhone to iTunes and then restore?
1
I've just upgraded to Monterey on my MacBook Air 2020 and now I can't play music through my bluetooth Samsung soundbar anymore