I've noticed my machine keeps swapping memory even though there is (at this moment) around 7 GB of RAM still free; does anyone have any insights on why this is happening, if I should care, and if so, how I can stop it? 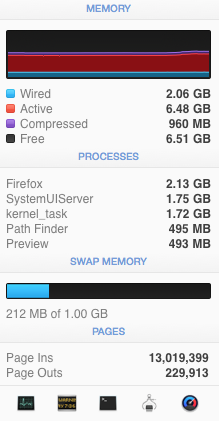 This looks 100% normal, fine and not at all even beginning to look like a problem.

Swap is for items that the system determines aren’t needed actively and frees up RAM for other tasks that can benefit. You have a very large proportion of free memory so the system is well in the green.

Apple’s activity monitor now has a “pressure” gauge so I would look at that and only worry if you see large page in / delays or yellow / red pressure on Apple’s graph.

To check page rates to and from swap, open a shell in terminal.app and run:

You will see counts per minute and the swap in and out are the ones to worry about. Next would be that you have a stable and low amount of free pages so that number going down to 0 or 10 would be worrisome about swap or allocations. Until then, you’re likely at full speed with any amount of swap that’s not filling your drive causing other issues.

Not the answer you're looking for? Browse other questions tagged memory .

2
Swap is filling up and shutting down applications, but most of my RAM is free

4
Why is my memory still inactive after purging?
9
Why does Finder use 59GB of swap space?
7
Disable inactive memory swapping
5
The free vs. inactive memory ratio on a Mac with 16 GB RAM has me concerned
4
find what's producing inactive memory
0
Is it possible to reduce memory usage by iTunes 11 on Mac?
2
Understanding active, inactive, free and swap memory allocation
2
OS X using lots of memory for no apparent reason
8
Mail memory usage?