Getting the First Cell NOT Containing Certain Text in Numbers

I have a table in Numbers, and I'm trying to get the value of the first cell that contains the character …. In order to do so, I wanted to use MATCH(), but had no luck after I realized it could only traverse 2 dimensions. Instead, I've set up a table on another sheet that looks like so: 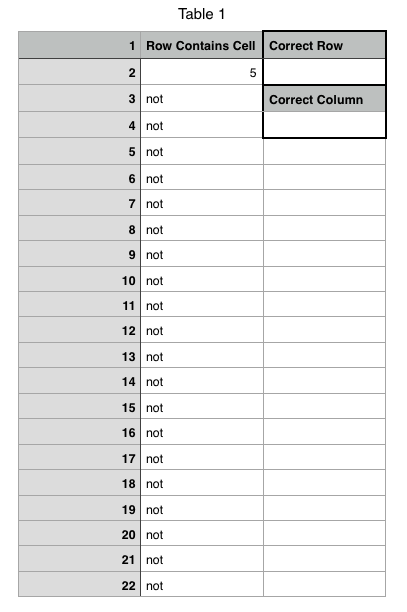 The numbers at the far left are the row numbers of the rows in the table with the actual data. Row Contains Cell is exactly what it sounds like: whether or not that row contains the desired cell. To figure that out, I used MATCH() per row.

What I need to figure out now is how to find which row is not the wrong row. It would be easy to look for a cell that says not, but I need to find a cell with a variable value that is not equal to not. I want to find the row name (or value of the cell to the left, in column A) for that cell (in this case, 2) and the value of the cell itself in column B.

What would be the formula for Correct Row and Correct Column, given what I'm looking for?

I know people have already done this for Excel, but I can't figure it out for Numbers.

As it turns out, I've figured it out. It did require Applescript. What I did was loop through the rows and selected the values in the row where "not" was not present in column B. Here's the Applescript I used via Automator:

Keep in mind that the cells I used are specific to my spreadsheet, but generally this method could be applied for any 2D MATCH() function.

Not the answer you're looking for? Browse other questions tagged applescript ms-office numbers iwork .

1
Get the next date from column of dates

3
How can I set Numbers to automatically copy a row of data from one sheet to another sheet?
3
Linking between tables in Numbers
1
Numbers: Find a cell in a table (lookup) using multiple criteria
6
In Numbers can you auto-populate a cell with a date when another cell is populated?
5
Setting the value of a Numbers cell using AppleScript
1
How to sort rows in Numbers without affecting the formula?
1
How can I add all of the text strings in all of the cells in a row together?
0
How can i have numbers from 2 columns match and return a third result?
0
Cell formula based on finding an index on another sheet