What can I do to check the integrity of the hard drive and all its files, to see if they are corrupt or not?

Recently there has been some files disappearing (in iTunes), and I'm not so sure of the extent of this problem yet. Perhaps it may have been an iTunes upgrade bug, but I'm not so sure.

What can I do to check the integrity of the hard drive and of all the files on my Mac computer, to see if they are corrupt or not?

Is there a hard drive integrity checker that I can use on my Mac?

Disk Utility does a very cursory scan of your disk, and should be your first software to consult should you suspect any problems with your disk. Select the option to Verify Disk from the main window. If all tests pass and the drive is marked "OK", but you still suspect a problem (or would like to do a more thorough scan, I suggest picking up SMARTReporter (non-free utility, costs money) and doing a much more in-depth scan.

To run the test, you will have to right click on the disk icon that will be placed in your system tray. Then right click the drive you wish to test and you will see a list of options: 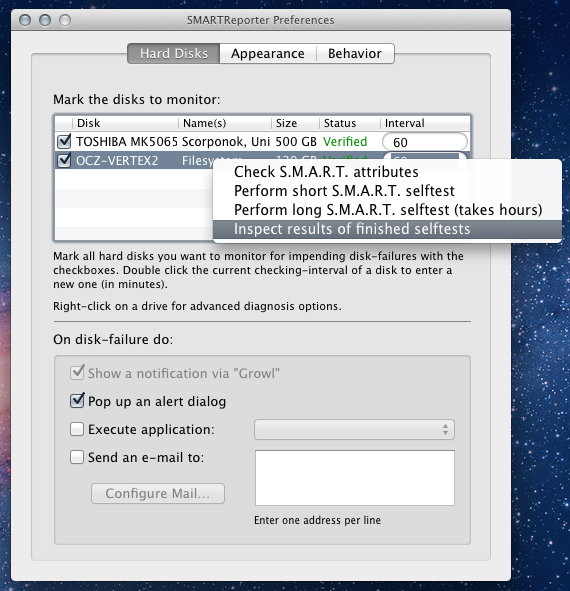 SMARTReporter can perform deeper and more meaningful scans, and can also print specific attributes and thresholds. Below are the results of my OCZ Vertex2 SSD:

Pay special attention to the Reallocated_Event_Count value, as that is the number of blocks that have been found to be "bad." If you see a high count, that could likely indicate problems with the drive and thus problems with the integrity of your filesystem.

This will give you a better idea as to the health of your current drive.

Should Disk Utility find any problems, repairing the primary partition (that houses your OS) will require a reboot. When you hear the boot chime, hold down the OPTION key and select Recovery HD from the list. Then launch Disk Utility from the menu bar. From there, you can repair your main partition.

You can verify the S.M.A.R.T. status of your hard drive at a glance using the System Information utility. (S.M.A.R.T. stands for "Self-Monitoring, Analysis and Reporting Technology.) 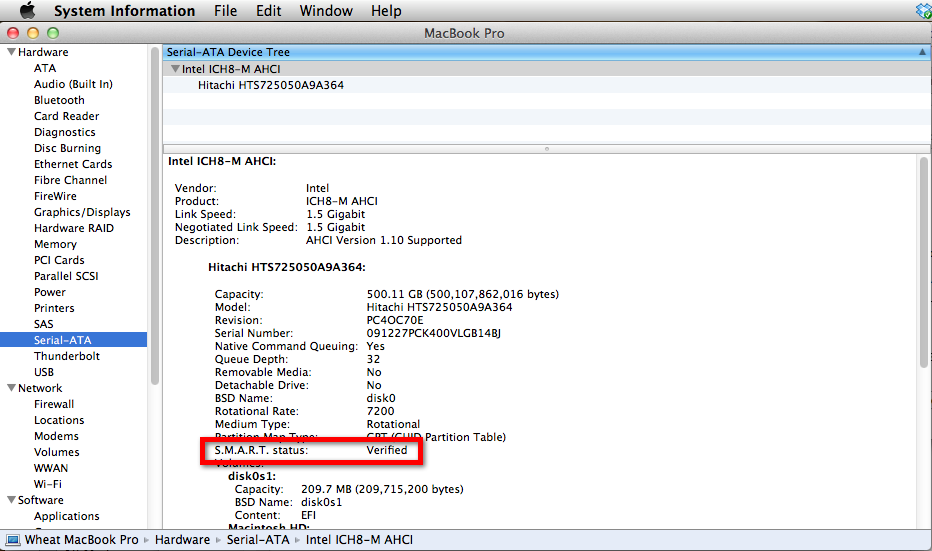 You can use the application "Disk Utility" that comes with every Mac. The application lives in your /Applications/Utilities/ folder, but is best when running it off of the Restore Disks that came with the computer. If you restart your computer with the disk in and hold C it will boot to the installer screen. In the menu bar in the top you can choose "Utilities", under there will be Disk Utility. In disk utility I would recommend clicking on the hard drive on the list on the left, then click the "Repair Disk" button on the bottom right. I recommend running the utility off of the CD solely because you aren't checking the files while some files may be in use for the Operating System. This offers the quickest and most reliable verification and potential repair.

My favorite disk maintenance software is probably DiskWarrior. It seems to fix more of my problems than the others. But it's rather spartan in other features. Definitely one to have in your toolkit.

Techtool Pro 6 is a great program. It does close to what DiskWarrior can do, but has all sorts of other features. Including creating a small partition on a hard drive that you can boot into to run maintenance utilities. You can also put other makers' utilities in there. It also has Safari and some other OS X features so you can research problems on the web while fixing. Though they do recommend not running other programs while fixing the boot drive.

DriveGenius 3 is a good one as well with its own set of tools.

But for checking disk integrity specifically, to see if imminent failure is there, all three of them check the S.M.A.R.T. status of your drive. Techtool Pro's S.M.A.R.T. checker is the most comprehensive. It helped me diagnose a whole batch of Maxtor 500 gig drives I had bought about six year ago (about 18 of them) and sure enough, within a few months, more than half of them began failing.

You can also use what's built into OS X. I have found Disk Utility has fixed things none of the others could fix.

And then you can start OS X up in single user mode (Raw UNIX) and check the drive as well. Here's how you do that:

Boot the computer and immediately hold down Command + S.

You'll see text scrolling and then terminal will appear. It gives the instructions I'm about to type right there so you don't have to have it written down.

To do that, type:

Hit return and it will reboot and start up normally. I use this every time I have a kernel panic or the computer locks up. Though with Lion I have it set to restart automatically if it hangs. So I'm ready to hold down Command + S as soon as I hear the boot chime.

Hope that's not too much information. :-)

Not the answer you're looking for? Browse other questions tagged macbook-pro hard-drive .

7
How can I recover files from a failing hard drive?
6
Space Occupied By Other Files And Folders On Hard Drive
0
Samsung EVO 480 *and* stock hard drive not recognised by Snow Leopard installer
2
Can I use a large external hard drive both as installation media and backup drive?
1
What is a locked hard drive, and how does it relate to encryption?
1
Is it possible to copy the remaining files of a (possibly corrupted) hard drive to an external hard drive?
0
Seagate External Hard Drive locked, can only read not write
1
How can I install macOS on the second hard drive inside a computer?