On my 2011 MacBook Air with Mac OS X Lion, I boot into Recovery mode via holding the command-R key during startup, if I go into Terminal and do a diskutil list, I get a list of 12(!) logical disks. disk0 is of course the disk holding the main HD and the Recovery HD partitions (along with the GUID partition and the EFI partition). But there is also a disk1 with partitions including one titled Mac OS X Base System that is approximately 1.39 GB big. There also are 10 other disks of varying but small sizes.

What are these other logical disks (and partitions) and is there any way to reclaim their space?

Update: Here is a copy of the diskutil list output: 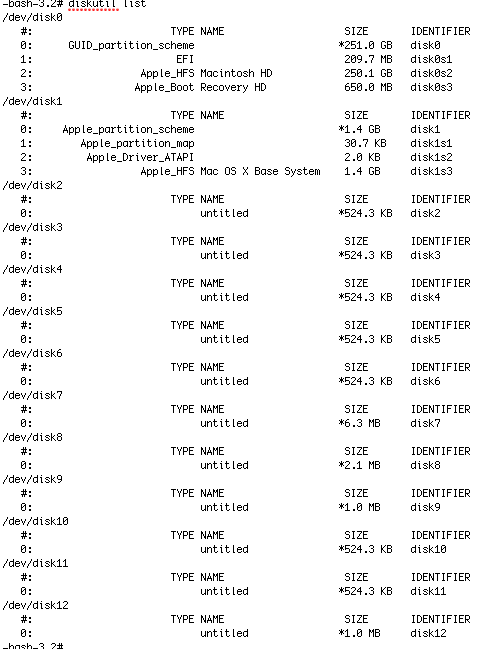 It's rather complicated, and actually a lot of the complexity is to avoid wasting space; I don't think you can "reclaim" anything without breaking it.

Let me start at the beginning: your hard drive (/dev/disk0) has two relevant partitions: Macintosh HD (your regular startup volume), and Recovery HD.

(Update: with newer versions of macOS running from an APFS volume, there'll instead be a single APFS "container" on the disk; the volumes under it will be listed separately under a "synthesized" device, probably /dev/disk2. And in addition to Macintosh HD and Recovery, there'll probably be Preboot and VM volumes, and starting in Catalina there'll be a separate "Macintosh HD - Data" volume holding the user-modifiable parts of the main filesystem. And some other details are different, but actually not that much.)

Recovery HD is marked in the partition table with the type Apple_Boot, but is actually in the normal HFS+ format. It contains minimal booter files and kernel, and at /com.apple.recovery.boot/BaseSystem.dmg, a disk image with a stripped-down and tweaked copy of OS X. The booter mounts this volume (it attaches as /dev/disk1), and transfers to OS X running on it. This is the Mac OS X Base System.

Notice that the Recovery HD is only 650MB, but Mac OS X Base System is 1.4GB? That's because it's a compressed disk image (and I'm pretty sure that compression is the reason they bother with all this disk image trickery). Actually, BaseSystem.dmg is compressed down to only 451MB (at least in OS X v10.7.0).

Also, the volume naming is somewhat inconsistent. You've got /dev/disk1s3 named "Recovery HD", but for some reason it's mounted as "/Volumes/Image Volume" in recovery mode. BaseSystem.dmg has a volume named "Mac OS X Base System".

So that's disk0 and disk1; what about the rest? I'm not certain, but I'm pretty sure they are RAM disks to save temporary data in folders OS X modifies as it runs (remember that in recovery mode, you're running from a read-only disk image). Running the mount command in recovery mode is informative:

Those "union" attributes mean that things in the relevant folder in the startup volume will be visible, but anything modified gets stored in what I'm pretty sure is a RAM disk.

If you want to look at this stuff yourself, you can mount the relevant volumes from the regular OS:

If you have broadband Internet and are ready to totally wipe the drive, you could use the Internet Recovery method of Lion Recovery to free up the disk0 and partition / erase the drive.

Be sure you have verified a backup of any data you want to save as this will wipe the SSD clean and let you install Lion and the normal recovery HD as it should be.

AppleCare will certainly walk you through this for free as you are in the complimentary support window for 90 days after purchase.

According to Apple community, trying to remove these small disks will crash Recovery (see this thread):

When you boot into Internet Recovery, the minimal system creates over 25 RAM-disks, of type disk-image, all modest in size, and uses them to hold temporary items. This leaves the boot drive completely free to be Repaired, Erased, or whatever needs to happen.

Trying to remove them will crash Recovery.

Those RAM-Disks are not permanent. Just restart into regular mode or Safe mode, and they will be gone.

Another answer with additional explanation:

In that report, your "real" disk is Disk0, size about 251GB, and it holds a GUID partition Map, an EFI partition, and a container-disk.

Look closely at the SIZES of those items.

Since diskutil list is recomputed at every startup, when you start up without Internet recovery active, your APFS Volume will likely move to a different disk number.

Not the answer you're looking for? Browse other questions tagged partition .

5
Cannot Unmount Mac OS X Base System Disk
6
Is there a way to clean up possibly invalid disks that only show up on Mac OS Recovery through ‘diskutil list’ in Terminal? Does Recovery use them?
2
How to delete redundant disks on disk utility
0
Sluggish 2013 21.5" El Capitan iMac
1
Two (2) macOS Base Systems?
0
APFS Container lost after crash and reboot
0
How to overcome Mac OS installation errors?
1
Can I safely delete the Mac OS X Base System Partition?

1
Can't modify partitions
5
Can't make more than two partitions
10
I think I messed up the Fusion Drive on my 1TB iMac (with BootCamp)
0
Can I get bootcamp to use existing free space on physical disk?
1
Boot Camp failed and reduced Macintosh HD partition from 3TB to 1,46TB
0
Deleted Bootcamp partition and it just disappeared. Nothing to merge with OSX partition
4
Mounting an external hard disk clone that shares the same partition GUIDs as the source/host hard disk
1
My Fusion Drive Partitioning Seems Wrong/Strange/Wonky
2
Mac EFI partition in wrong place (disk0s2 not disk0s1)