I have macbook pro 15" (late 2011). Its showing a distorted green logo and loading bar on starting. Its taking around 10 min then showing just white screen. I tried resetting pram, but its still the same. What might be the issue ? How to fix ? 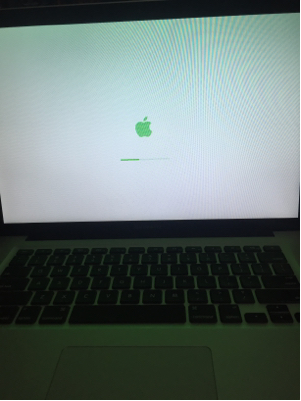 I would say that you have a dying/dead discreet GPU, as that's a known problem with your model of MacBook Pro. Booting into safe mode may be doing something to help your GPU (I have an Xserve with a confirmed dying GPU that boots in safe mode but not without it) so it boots properly. I would highly recommend getting your MacBook Pro replaced as soon as possible via the Apple program. I would suggest you run Apple Hardware Test and verify that your GPU is dead/dying, but this may not be possible given your current state. Similarly, you can run a GPU stress test program like Unigine Heaven and see if your GPU quits.

In any case, seeing if you can get your computer replaced probably isn't a bad idea since it's pretty likely your GPU is dying. Go to an Apple store, explain the issue, and they'll probably give you a new computer.

Not the answer you're looking for? Browse other questions tagged macbook-pro boot .

2
Why can't I no longer boot into my MacBook Air?
0
Macbook Pro 13-inch stuck at Gray screen with apple logo and wheel
0
MacBook Pro won't start up
1
MacBook Pro fuzzy screen and freezes on startup at the Apple logo with half progress bar
2
13" MacBook Pro (Mid-2012) failing to fully boot
2
MacBook going into blank screen after Apple Logo