My Mac Pro 4.1 (circa 2009) has a MacPro Raid Card and the software shows two storage volumes - one 1TB SAS disk and one 2 TB SAS RAID volume.

The removal of the Parallels volume leaves me with the following showing in Disk Utility: 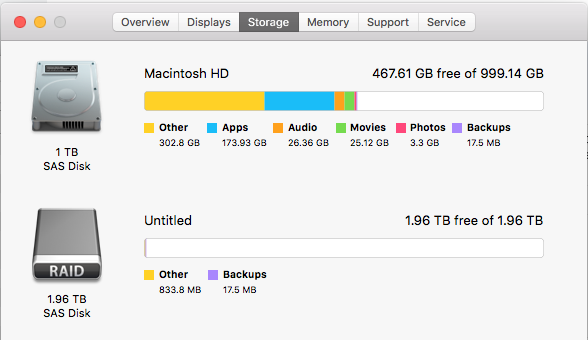 Some final context, I have repurposed this MacPro (formerly an R&D server) as a desktop. My most demanding application is Mathematica used for analytics of financial data.

As per request from comments:

Should the machine have both of the above APPLE RAID Card Media volumes?

Why aren't they the same size and how do I tell if I have RAID for protection or for speed?

Basically, can someone explain what the above information means and provide suggestions to set this up properly?

The hardware RAID card is very different than the software raid so you'll want to dig into two specific tools:

These two items will report the actual hardware states such as health, mirroring, degraded mode, etc... The RAID card hides the actual hardware from diskutil and Disk Utility so they are of less use than if you were doing a fusion drive or software RAID.

As to the proper setup - that really depends on which tradeoff you wish to make. Speed comes at the cost of reliability. Redundancy (or mirroring) can provide a speed up for reads but a slight slow down for writes. You'll also want to check the battery status and replace that as well as make sure you have backups of the data since RAID is not a backup but just a way to optimize for one aspect of storage over another.

Once you have a handle on the actual hardware and how the RAID card is using the drives, perhaps ask a follow on question on your options for changing things and/or a basic question asking what RAID 1 or 0 or 5 are if that's of concern.

Not the answer you're looking for? Browse other questions tagged macos hard-drive mac-pro raid disk-volume .

2
How do I remove everything Parallels?

0
Upgrading to Lion - Questions about disks, RAID and backups
4
With Mac Pro, is software RAID 0 worth it?
2
MacPro 3,1 (2008) logic board SAS connector: Has anyone "replaced" the stock hard drive backplane?
0
RAID questions with ML
2
VMware ESXi compatible RAID card for the Mac Pro
0
Mac Pro going to sleep when rebuilding RAID array
1
Do I have an SSD and a hard drive on my MacBook Pro?
1
Recovering a RAID 0 volume