How do I remove everything Parallels?

The last user of the machine had Parallels 3 running on it and it may be messing up the machine. I don't need or want Parallels and want to completely remove it and its partition. It looks like someone has tried to remove Parallels in the past, reset the partition size, and deleted some files - kind of messy.

I ran Disk Utility - First Aid to see what it showed: 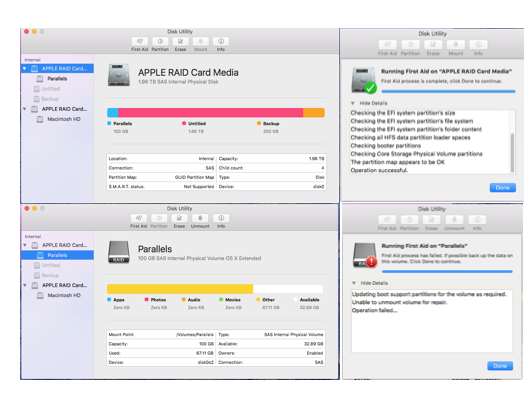 You can see that Parallels has some problems.

Commenters have noted the images look too small, but I think the main take-away is that First Aid on the Parallels volume fails.

Additionally, the following screen shot shows what remains in the Parallels partition:

Which just shows an empty Backup folder and some inaccessible virtual machines from the time of Snow Leopard.

How can I get rid of Parallels, its partition, and everything previously associated with it (hopefully, short of a complete wipe of the machine, but I'll do that if necessary)?

Additional things I've tried... I've tried to use Disk Utility to Erase the Parallels volume. Doing so gives me an error:

Doing the same thing at the APPLE RAID Card Media that has Parallels under it gives me the same error.

Clicking the Unmount button in Disk Utility doesn't seem to do anything, no message at all.

Right clicking on the Parallels "disk" that shows on my desktop and selecting Eject "Parallels produces the following error message:

"The disk "Parallels wasn't ejected because one or more programs may be using it.

You can try to eject the disk again or click Force Eject to eject it immediately.

I have not tried to Force Eject the Parallels "disk" that shows on my desktop, yet. Thoughts?

Not the answer you're looking for? Browse other questions tagged macos partition parallels-desktop raid .