I've been a windows user for a long time, and I hate the ⌘ shortcuts for stuff. Since I only use my Mac for work stuff, I figured I'd just redefine the App Shortcuts from the keyboard menu so I could use control+C, control+V, etc.

This works fine in almost every app I've tried, except Microsoft Outlook. There control+C works, but control+V does not. I can copy selected text just fine, but Paste exhibits some weird behavior. 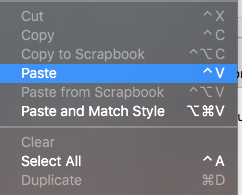 The Edit menu does not flash (and no other menu flashes either) signaling that a keyboard shortcut in that menu has been pressed until the cursor is at the very end of the document.

And I have everything set up correctly in keyboard settings: 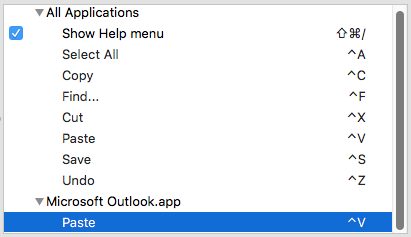 Has anybody found a solution for this issue?

Edit: Turns out it's not just Outlook that has this issue. Several OSX applications will view CTRL+V as a "scroll down" operation.

Create DefaultKeyBinding.dict under ~/Library/KeyBindings (Create KeyBindings folder if it doesn't exists) Then paste the contents below into that file:

Alternately, you can use the following, non-XML syntax (this is the entire contents of the file, and any other keybindings would go inside the curly braces):

Restart Outlook, and all other affected programs, and ctrl + v should no longer scroll down.

Not the answer you're looking for? Browse other questions tagged keyboard macos ms-office .