Reveal each bullet by opacity in Keynote 6.6?

This question is an exact duplicate of How to partially uncover bullet points in Keynote except that I am asking for the current generation of Keynote (version 6.6.1, rather than Keynote '09).

As seen in this animated gif:

I want the same effect as Build In > Appear & Move > Dissolve with Delivery set to By Bullet Group, but I want the initial display of all bullet groups to be translucent rather than hidden.

My motivation is so that while giving a presentation I can see all the items immediately to remind me how to properly phrase my speaking, yet keep the audience’s attention on each bullet point. 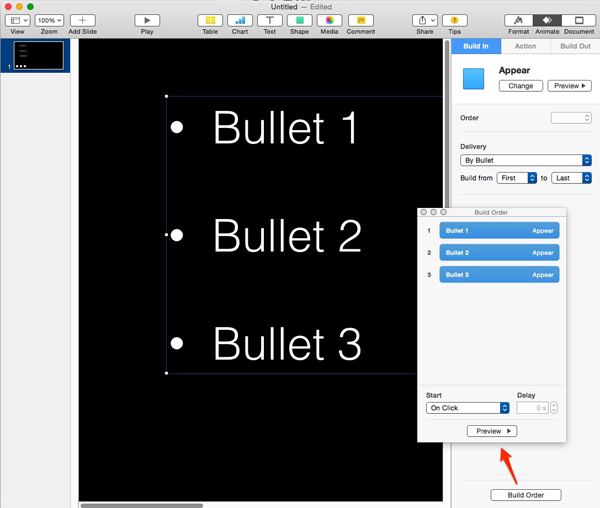 Using the Animate tool and the settings in the Build In automator Appear, the first bullet point will present in full 100% luminance with the succeeding points dim. As you click, the bullet points will appear as you have shown in your example.

Not the answer you're looking for? Browse other questions tagged keynote animation .

9
Animate a pie-chart in Keynote
12
How to partially uncover bullet points in Keynote
1
Animate textual changes in keynote
3
Animation for charts in Keynote
10
How to make truly single spaced bullet items in Keynote
1
Keynote transition delay time for each slide
2
Keynote 6.6: How can I make an object wider by animation, but not higher
4
Keynote - gray out previous bullets
0
Complex Appear In Keynote Presentation