I speculate that the audio signal at the Optical Audio Out of the 3rd generation Apple TV is always the same audio signal within the HDMI output.

I further speculate that that's the reason behind eliminating the Optical Audio Out connector in the 4th generation Apple TV.

Hence one does not need to worry about losing Optical-Out when replacing an ATV3 with an ATV4 provided that either:

Is my understanding correct? Am I missing something?

Here is the setup I have in mind: 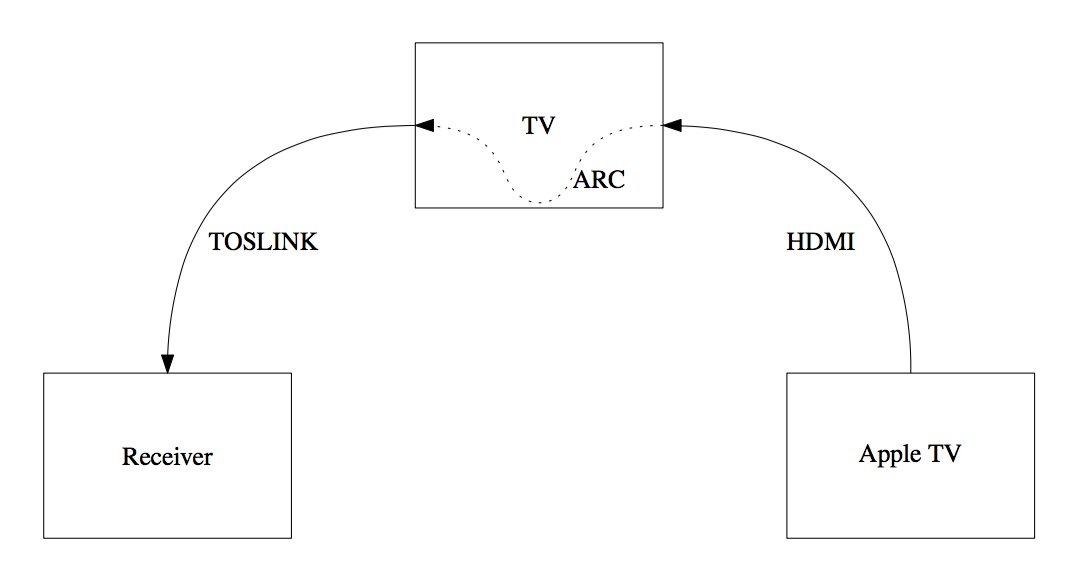 The understanding in the question is correct.

With a very recent somewhat-high-end LG TV, I have been unable to find or to activate a feature that functions like Active Return Channel, nor one that is called a synonym of ARC or "pass through".

The conclusion is that when Apple omitted Optical Audio Out on the most recent Apple TV 4, they were basically assuming that those using an ATV4 to listen to music will upgrade their receiver and buy one centered on HDMI connections. Given the expected lifetime (and price) of nicer receivers, this is not necessarily a good thing, and so you may be better off with an ATV3 than an ATV4, until you're ready to upgrade your receiver.

But there is one caveat. If you stream your lossless audio files through AirPlay to an Apple TV (either 3 or 4) from your iphone, iPad, or Mac, you are not listening to lossless files on your sound system. This is fairly easy to confirm by a listening test. Presumably Apple designed things that way to conserve bandwidth (strangely, since a quick calculation will reveal that there is more than enough WiFi bandwidth to spare to transmit an audio stream with no further compression). It may even be the case that mp3 (or other lossy) files go through a compression-decompression cycle when they are sent from iOS/OS X to an Apple TV. I haven't been able to confirm this conclusively one way or the other.

Hence if you do listen to Apple-lossless files, you would not want to use AirPlay anyway (and there is no other way to go through the Apple TV). You then need a (dedicated?) iOS/OS X device hooked-by-wire to your receiver, and then it's a moot point whether your TV has ARC. It's even a moot point whether you chose Apple TV over the competition. There is of course a (significant) advantage in using a Mac rather than an iPhone/iPad since Macs provide an optical digital signal out. Using an iOS device (which would anyway be scarce on storage and would introduce its own problems if you hook additional storage) would indeed send a lossless file, but you'd still be losing by using whichever D/A converter Apple uses in their iOS devices. Whether this would be perceptible will vary from one setup to another.

Sequel question: how are things like on the Roku, Amazon Fire TV, and Google Chromecast? Do any of these make it possible to transmit/receive lossless files (perhaps in the non-Apple-centric FLAC) from some device (Android, Linux, Windows, or Mac) without going through a compress-decompress cycle?

Not the answer you're looking for? Browse other questions tagged appletv hdmi .

3
Simultaneous use of Airport Express and Time Capsule

2
Optical out does not work on my new 2011 Mac Mini
2
Can I direct the audio signal from Apple TV?
1
How to prevent from changing volume when using 2 to 1 RCA connector
2
Do Apple Lossless tracks remain lossless when sent via Airplay to a 4th gen Apple TV?
1
MBP 2012 +, light projector, Home Theater system, HDMI spitter, no audio, puzzle?
0
Music sounds louder than Movies and TV Shows on Apple TV 4K
0
MiniDisplay port to HDMI to optical 5.1 audio only has 2-channel output