How to eliminate Internet lapses on my MacBook Air 13?

I have a MacBook Air 13 (mid 2012) running OS X El Capitan (10.11.3). I connect to the Internet using a Virgin Mobile Netgear Mingle hotspot. During Internet browsing sessions I will at times experience a browser session which appears to be frozen. This is noticed when I try to go to a link exhibited on the page that I am viewing and the connection isn't successful. The browser shows that it is trying to connect, but eventually the new connection fails. During the time the browser is frozen like this, I can open a new tab and try to connect to www.google.com, and that connection will fail also. If this happens while using Firefox, switching to Safari has the same experience (Safari also acts as if frozen). Or vice versa.

I can successfully ping external servers (e.g. youtube.com) during the period when the browsers are not connecting (the ping is done via a Terminal window). I can use my wife's MacBook Air 11 (mid 2012, OS X Yosemite) and on it, Safari can connect to www.google.com during the time that the browser on the MacBook Air 13 cannot make connections. Her MacBook Air 11 is using the same Virgin Mobile Netgear Mingle hotspot. Checking wifi channel on both MacBook Airs has shown the channel # to be the same, so that seems to rule out channel interference as the problem. During a lapse on 2/15/16 I used the Mingle Hotspot Manager to change the channel from 6 to 11. The lapse continued, unabated.

When the browsers are frozen, the "App Store" appears to be frozen as well.

I've researched this problem on the Internet, but I haven't found any suggested solution that corrects the freeze.

These freezes exhibited themselves with OS X Yosemite as well (10.10.5), prior to upgrading OS X to El Capitan.

I have noted a correlation of these freezes with the failure of an application to Quit properly (as noted by its appearance in the Force Quit list (Command + Option + Escape) after Quit has been used).

I attach an output from Wireless Diagnostics Info during one of these freezes. 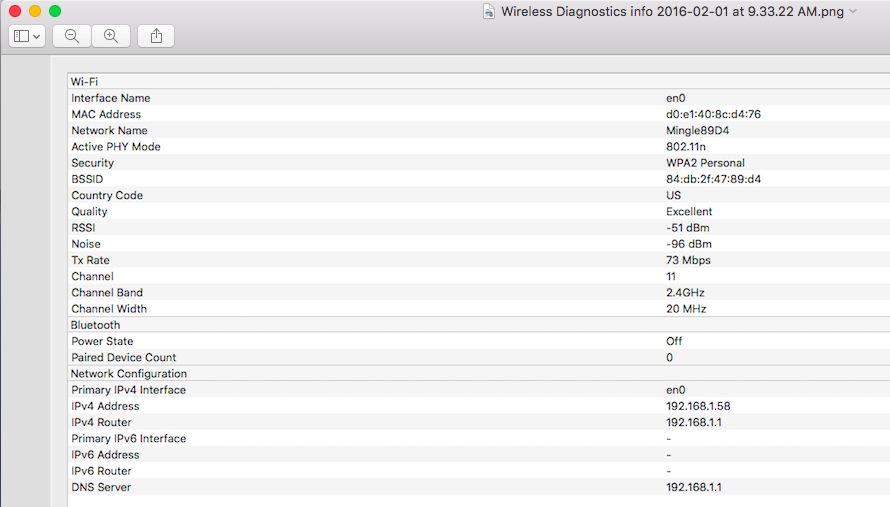 I now believe that these lapses/freezes can be blamed on the network setup that I was using. My brother visited and with his Dell laptop running a version of Microsoft Windows the same thing happened. I've since switched to a different Internet provider and haven't had the problem again. The first Internet provider is in the process of discontinuing its service.

Not the answer you're looking for? Browse other questions tagged macbook-pro wifi hang .

2
MacBook Air can't connect to cafe wireless, but iPhone can
0
New 2013 MacBook Air connects to routers everywhere but home, older MacBooks connect fine
0
How can I figure out the culprit with internet hiccups my wife is experiencing?
2
2011 Macbook Air connects to WiFi but can't get Internet
3
Internet Sharing Over Ethernet
2
Macbook Air 2013 causing Wifi Drop
0
Many websites not opening from a certain WiFi connection