Under System Preferences > Sharing, there is an option to share your connection from wherever "to computers using: iPhone USB": 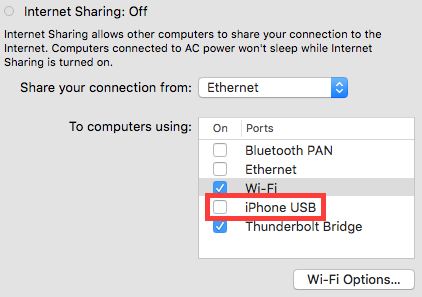 i.e. reverse tethering over USB.
However, according to these two answers, reverse tethering is not possible over USB with a vanilla iOS.
Three other sources describe a way to do it on a jailbroken iOS, but although stated otherwise, this seems to work only with a Windows PC.

Also, I'm pretty sure that the above option is neither "normal" tethering, like

which would be under "Network": 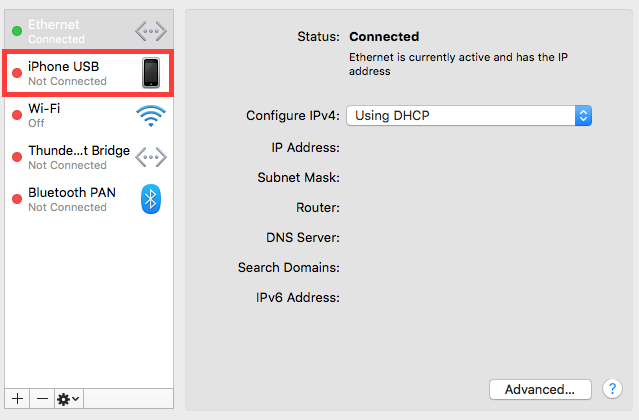 nor sharing a connection from an iDevice to something else, like

which would be in the "from" field on internet sharing: 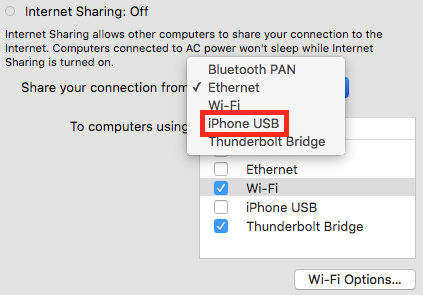 So, about the option shown in the first picture:
Evidently it cannot be used to tether to vanilla iDevices, and there's no way Apple would put it there for jailbroken devices, on which it also doesn't seem to work.

So what does it actually do, and what can it be used for?

I believe in Internet Sharing settings, OS X is just listing all of the network interfaces. iPhone USB is listed there for that reason, even though it's not a meaningful option.

Not the answer you're looking for? Browse other questions tagged macos ios usb internet-sharing .

65
Can I share my iMac's internet to iPhone or iPad over USB?
16
Share internet connection from a PC to an iPhone through the USB cable
7
iPod Reverse Tethering via USB
3
Enable internet sharing via iPhone USB

65
Can I share my iMac's internet to iPhone or iPad over USB?
6
How to download any iOS manually?
0
Is it possible use USB tethering feature of ios devices as similar to andriod?
0
How do I make my iPad Retina wifi hotspot discoverable (tethering 3G) when off and unplugged like my iPhone 6S?
2
Reverse tethering an iPhone 4s with dead Murata wifi/bt chip
0
Sharing a TUN VPN connection with Android & iOS for traffic interception
0
Share Mac internet with iPad using USB