How to make a Mac OS X .app with a shell script?

I tried following a few tutorials, but I get this: 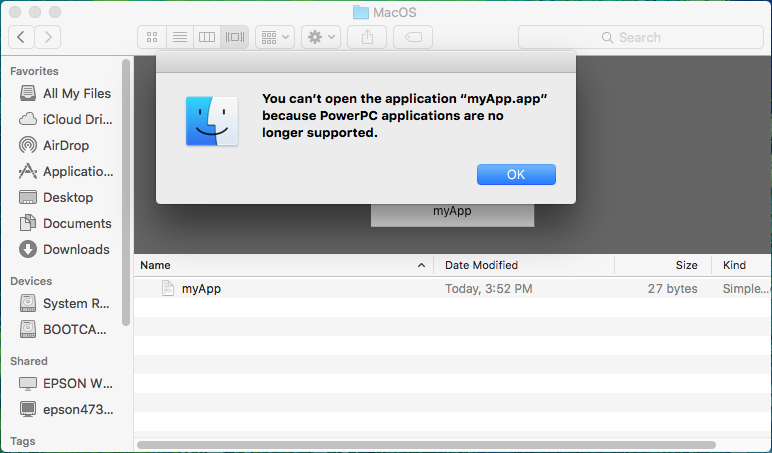 How can I fix this? I added in a info.plist (I just copied and pasted another app's file, and changed around a few things.)

P.S. I am using El Capitan

Well, it's been years I use this simple trick to have bash scripts in application (and really really don't understand why all people try so complicated solutions as creating "Contents" folders, info.plist or use Automator or Platypus or so... ????) : Create a folder named "YourApplication.app". Put your bash script file directly in this folder the way that suites you the best (Finder, terminal etc). The bash script must be executable of course (use chmod +x if you need). No need for other folders or file (until you need to call other scripts or executable from within your script of course) The trick is to name your script with exactly the same name as the application folder but without extension. In the case described here the script file must be named "YourApplication". That's all ! It works on Mac os x since Snow Leopard to Mavericks. If anybody can try on newer OS versions and tell me.

Note: The script must be at least 28 bytes in size, otherwise it will not execute. It may be padded with blank lines to achieve minimum size. Also, the first line of the script must be a shebang; e.g. #!/bin/bash or #!/bin/perl.

If it is a simple shell script, then you don't need to wrap it in an application bundle; you can double-click the script itself. However, you won't get the ability to have a custom icon or other things like that.

I think there are a few helpers out there that can wrap simple scripts, but the only one that I have experience with is Platypus which allows you to make shell/python/perl/ruby/etc scripts run like regular applications with icons, I/O redirections, etc.

I haven't got the reputation to comment on bjb's answer but you can add custom icons to .sh scripts. You just drag the image onto the icon in the get info for the file. I think it has to be png and you can get opacity working.

Not the answer you're looking for? Browse other questions tagged macos terminal applications powerpc .

0
Randomize MAC Address Using Platypus
2
Include icon in manually created .app bundle
1
Open a picture with Photoshop or Preview based on file location

3
Inserting shell script into .app bundle
0
line 1: syntax error near unexpected token `newline' with HTML + shell script
1
Automator: Change to selected directory and run shell script
4
Change file icon OS X
1
How to determine what an app does and if it contains malware?
0
How to package an app with sqlite3 database
3
Automate package installation via shell script for macOS?