I'm migrating posts from WordPress to Jekyll. My exporter created markdown files in a hidden folder, unexpectedly. I am trying to move the markdown files from the hidden folder to a Jekyll site I've previously setup. In Terminal, I have created a copy of the markdown files in the correct directory. However, because the exporter generated folder was hidden, all of the contents have remained hidden. I cannot see the files in Finder and Jekyll cannot render the files correctly when I try to start the server.

Update 1: I have created an issue on the github page for the exporter, but I haven't gotten a response yet. I have tried some of the solutions below, including using Finder> Go to folder... and chflags -R nohidden ~/jekyll-site. Due to the Go to folder..., I am now able to see the folders created by the exporter. However, the folders still appear empty in Finder. chflags hasn't helped.

Update 2: I ran ls ~/jekyll-sites/subdir | wc -l, as suggested below. I got "11". Meanwhile, I thought that if I just started the server that would help. It kind of did: my posts are showing up correctly on the blog, which is an improvement, but I still don't actually see them in Finder. I've tried opening the posts in Sublime and trying a Save As. When I do, I can see them all listed in the dialog but they are all greyed out. What's more, I get an alert "A file with this name already exists".

Update 3
Tried a solution to create copy of the files, without the "._" prefix in case that could copy the files without copying the problem. That didn't work, but I wanted to include that here in case it's helpful to others.

Solution: No idea why this worked, but I ended up restarting Finder, which seemed to fix the problem.

You can use chflags in a Terminal to hide/unhide a file where file is an individual file or folder or when using the -R option, all files/folders within a folder. See: man chflags

Basic syntax to hide a file is:

Basic syntax to unhide a file is:

Note: If the folder is a system folder you'll need to preface the chflags command with sudo, e.g.: sudo chflags nohidden file

For just moving files and folders within the hidden folder, it might actually not even be necessary to unhide the folder as long as you know its name—or know how to get it.

For example: I know that a Library folder exists within my user folder but I cannot see it in the Finder: 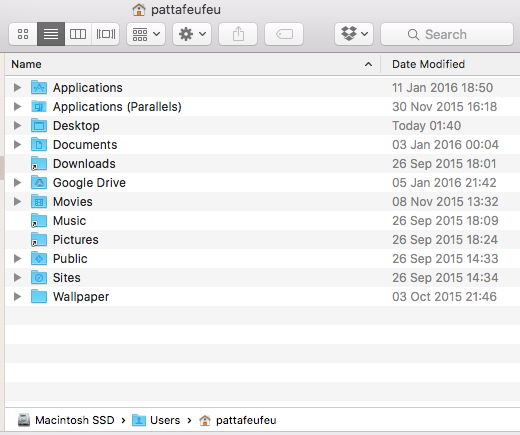 However, I can use CMD+Shift+G to open a prompt where I can type in a folder I want to go to. If that shortcut doesn’t work for you, in Finder’s toolbar select Go > Go to Folder. The input field there actually has tab completion like the terminal does with bash, so you can, e.g., type in ~/Lib, press tab and it will automatically be turned into ~/Library/.

This, as I mentioned earlier, only works if you know where to find the hidden folder. If you don’t, you can open the Terminal (CMD+Space, type Terminal, press Enter/Return) and get to the closest folder where you think the hidden folder might be and then type ls -al. This lists all files—including hidden ones—as a detailled list. Hidden files usually start with ..

Once you got the exact path, you can try what I wrote above with the Finder’s Go to folder action.

2
How to copy file/folder beginning with dot from Mac to PC without hidden attribute?
9
AppleShowAllFiles does not show hidden files
5
Hidden folder without a dot at the start
4
Hidden Folder not showing in Finder with show all hidden files
1
Finder folder icon showing items count when empty
3
Show hidden files in SELECT folder only
2
Unable to show hidden files on Mac
3
Opening Mobile Documents folder in Finder on Sierra