Only display on Thunderbolt works. Camera, audio and USB ports do not

Very similar problem as this question, only the display itself is working on the thunderbolt monitor (I only have one, unlike the linked question which had two) with a MacBook Pro (Retina, 15-inch, Early 2013). No camera, no audio, no power to USB ports on the display. If I disconnect the thunderbolt display from the MBP, then power does go to the USB ports.

(more details below which probably don't amount to much)

This is actually the 2nd Thunderbolt monitor I've had recently. My company exchanged out my previous one, which had similar issues. The prior Thunderbolt was fine, then one day the display would not turn on, attached devices no longer received an active charge. Power would return to USB ports if display was unplugged from the MBP. Then a day or two later, everything went back to working, but the new monitor had already shipped out.

Replacement monitor worked fine the first day, then (of course) the day I shipped back the prior one, started acting consistently as described above - display only, no camera, audio or usb power.

I tried the SMC reset steps (about three times, in case it was sensitive to pressing all 4 keys "at the same time" in just the right way). That hasn't worked.

There is a known similar issue with certain 27' Thunderbolt displays going black, and having connection issues. https://support.apple.com/en-us/HT204450

Can you check the firmware version of the Thunderbolt display? 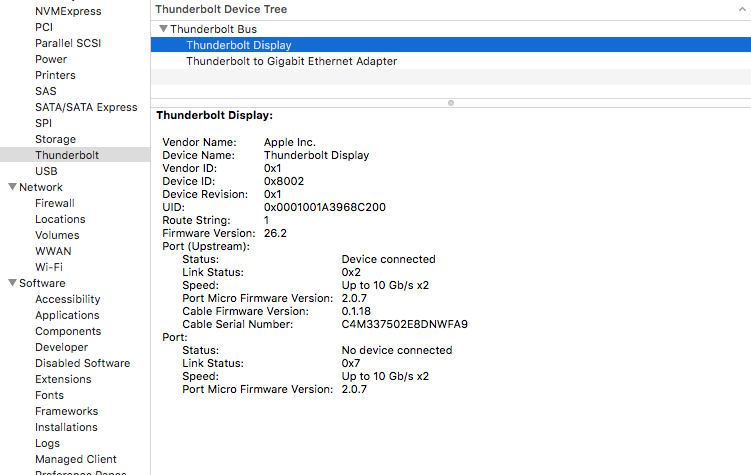 I have the opposite problem. My Thunderbolt display used to work fine but now displays only intermittently. However, its sound works fine and the laptop recognizes the monitor. Suspect fluctuating power screws up display; have tried various power cords and they sort-of work, then fail. I have a UPS/surge protection unit on order; have read others' posts and some have reported success with this.

Not the answer you're looking for? Browse other questions tagged display audio usb thunderbolt .

2
Troubleshooting the USB ports and peripherals on a Thunderbolt display