What is Apple's policy for supporting security updates on older versions of iOS?

Does Apple have a policy regarding how long they will continue to release and support security fixes for each iOS release?

I observe that many people complain about performance issues with iOS upgrades on their relatively "old" Apple devices. Therefore, before buying, I would like to foresee how long my device will be provided with security updates by Apple for its default iOS version.

I specifically wonder the date of end of security support for iOS 6 (its latest sub-version, probably 6.1.3).

Edit in 2019: I have came across a graphic showing Apple's support for older devices. This is not specifically about security updates, but still I think it is relevant and interesting. 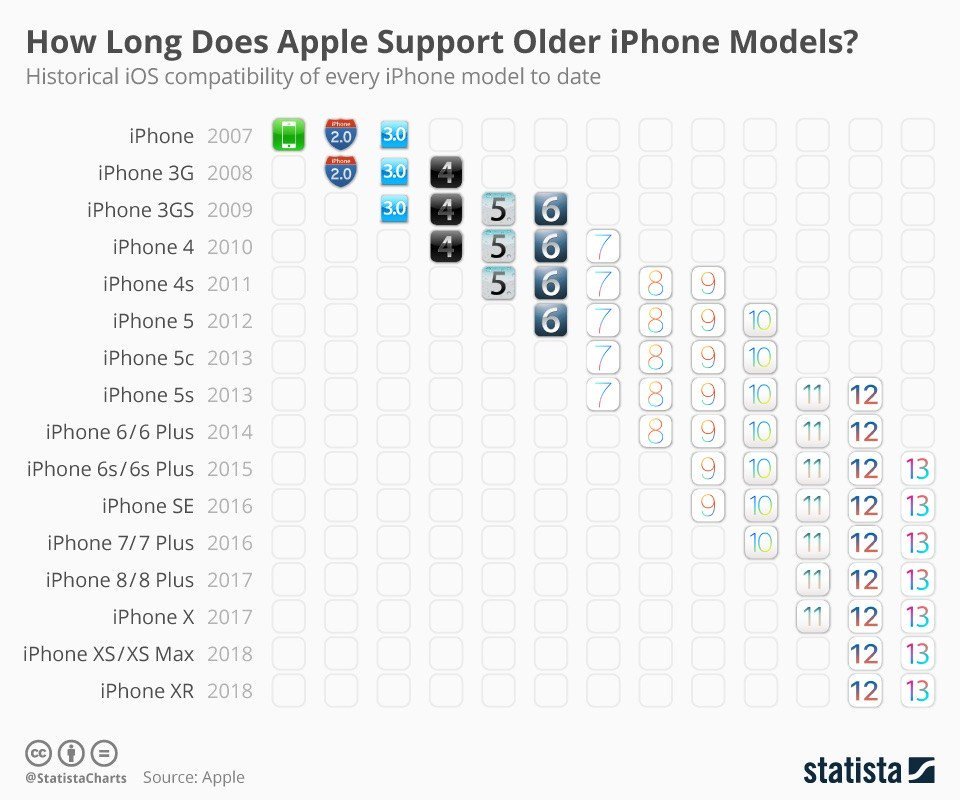 Unlike for Mac OS X, Apple does not release "Security Updates" for previous versions of iOS after the next major version has been released, unless it is an extremely major vulnerability. Simply put, you are required to upgrade to the newest version if you want all security fixes.

As an example, once iOS 10 is presumably released later in 2016, there should be no expectation of security fixes for iOS 9 (whatever the last version will be).

For iOS 6 specifically, the last general release was iOS 6.1.3. iOS 6.1.4 and 6.1.5 were specific bug fixes for certain devices. iOS 6.1.6 was released in February 2014, to provide a security fix (goto fail) for iPhone 3GS and iPod touch (4th generation) devices. That was well into the support period of iOS 7, and was only released due to the severity of the issue.

Other than iOS 6.1.6, there have been no security updates issued for old versions of iOS after a newer major version has been released.

Apple hasn't announced a security update policy, but owners of older iPhones should have some peace-of-mind on this.

Not the answer you're looking for? Browse other questions tagged ios security .

2
What's the current state of delta updates for iOS apps? Were they ever promised? If not, any word from Apple on if it will come?
2
iOS 5 for iPhone secretly contains iPad calendar features?
19
What is Apple's policy for supporting security updates on older versions of OS X?
12
How long does Apple provide support for Mac OS X?
1
What are Apple's Update and End-Of-Life policies in 2015?
0
Mobile Safari updates for older iOS versions
1
Compatibility of oldish iPhones, Apple's policy, future perspective
0
Starting from March 2019, is it necessary to build all existing apps using iOS 12 SDK and Xcode 10 for it to work on iOS 12 devices?