I want to make an Automator workflow to run a shell command. For example, I want to receive text input from the user and treat that input as a shell command instead of text. I have tried passing argument as stdin but still not able to make it work. Here is a simple example of what I am trying to do:

The user input some text, say, 'xyz'. I want to pass this text to shell script as follow

to get xyz as the output of the shell script to show in show result action of Automator.

When passing input to Run Shell Script in Automator you need to change Pass input: to stdin to Pass input: as arguments as shown in the example workflow below. 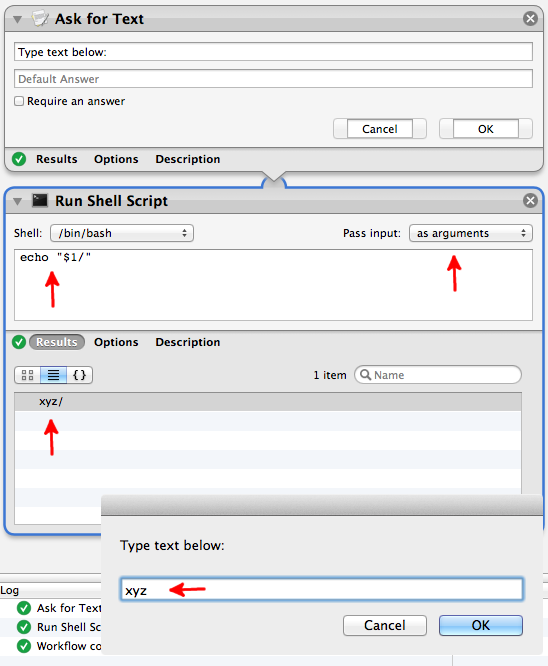 Not the answer you're looking for? Browse other questions tagged terminal automator script .

3
Automator choose finder folder and run shell script
23
My Automator Workflow fails because it fails to find the git command within the 'Run Shell Script' command? Need help
2
Automator to execute shell script with an input text file, copy it to specific directory
2
Automator won't execute my bash shell script
9
Passing a password to an Automator application
4
How to create an Automator service to run a script on all files in a folder
1
Automator: “Run Shell Script” throws error because of missing “on” command
3
Automator action to run python script on series of files fails in Catalina
0
Automator Change to directory of dropped files before running Shell command