Automator services embedded as a context menu are a great way to quickly scale down JPEGs in the finder. Right click the file, choose your scaling script, done in seconds. The problem is it obliterates the files' date stamps, overwriting them with the date of the scaling operation.

Is there a way to use Automator to preserve date stamps during scaling?

If not in Automator is there a better way of doing this? 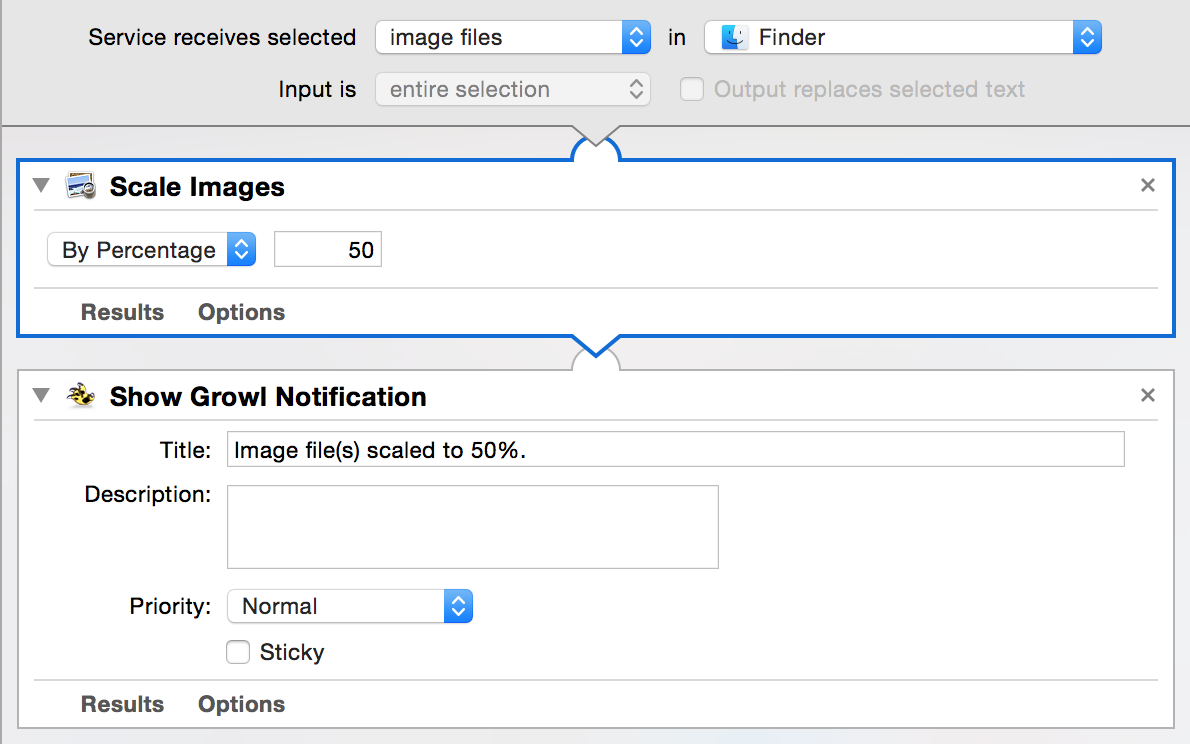 Here is one way of achieving the stated goal with an Automator Service. Instead of using Scale Images use Run Shell Script with settings, Shell: /bin/bash and Pass input: As arguments and add the following code to it:

Note that the last line in the code above can be omitted if you are going to use Show Growl Notification, which I don't have and why I used a system sound. This was done under OS X 10.8.5 and you'll need to verify the path to the executables are the same on your system, although they should be the same. The reason I'm using the fully qualified pathname of each executable is because Automator errors out if I don't. You can get the FQP in a Terminal using which, e.g., which sips returns /usr/bin/sips.

Note that GetFileInfo and SetFile are a part of Xcode Tools and if not already installed you'll need to install, which can be triggered by typing GetFileInfo in a Terminal and following through with the prompts.

You can read the manual pages for each of the commands used to garner a more through understanding of what's happening. 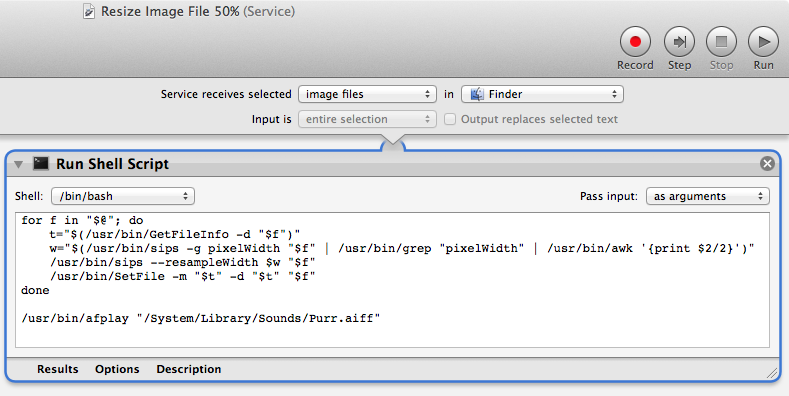 The filesystem in Mac OS X retains 3 separate timestamps for files, as follows:

atime - Access time (when the file or contents were last accessed)

mtime - Modification time (when the actual contents were last changed)

While these are set automatically during the various stages of a files life through normal interaction, it's important to understand that they are also all changeable to any (valid) value you want at any time. You can overwrite the last modified time to a previous date, if you really have to, etc, with a simple terminal command:

So all you need to do, is read the existing time you wish to store, make your changes, and then reset back to the original. All this can be done within Automator.

I'll leave you to play with getting the below into Automator, as I don't have time, but here's a quick and dirty way (with lots of comments, and checks to ensure you understand it and it's not just a load of terminal commands) to read a timestamp, store it in a file for later, and then reapply the same timestamp using the command line.

You should be able to save these as short scripts modified to accept the filename as provided by Automator), and then call those scripts as individual Automator actions

The tricky thing is in capturing the whole date string in one go, as you can see the format changes, and you lose the time in order to display the year for old files (and as we have just rolled into 2016, almost all your files will simply show 2015 instead of the time stamp if you use ls...

...So you can use other commands, like getfileinfo instead:

So without further ado, here's a horrible hack that someone can improve on:

Step 1, read the timestamp and store it in a variable, and also in a file so that we can retrieve it later

Now we read the timestamp, and pass it through a command called awk a couple of times to strip out the space in the timestamp and replace it with a colon, then using / and : as delimiters, print out the date in the format that is required by the touch command later (this is a bit nasty, but essentially the first pass without a delimiter provided uses a space as default, which I replace with a colon, so that the next pass which specifically delimits on : works properly - I couldn't get it to use a space and : and / in one pass... - but readability was more important that efficiency) . Echo the variable to prove you have created it correctly, then dump it in a file so you will have it later, read the file to prove it:

Here I just append some text, but your Automator would do it's stuff here, then print the amended modified times to prove it changed:

Step 3 Put the old timestamp back

Now reset the modified timestamp, by using the touch file as shown at the top of this answer, but automating the bit where we include the date to include the contents of the file we now know includes the timestamp we need in the correct format:

Some more checks to prove the original timestamp is in place:

It's possible to do this without the need to download Xcode

With the sips command in the "Run Shell Script" action to replace the "Scale Images" action.

You can change the quality (the number after -s formatOptions) 0-100, the default is 80.

Not the answer you're looking for? Browse other questions tagged finder applescript automator graphics .

5
How Do I Batch Convert Hundreds of ClarisWorks Documents to a Modern Format?

1
How to dim (and un-dim) display in automator
1
Automator Service that does predefined simple calculations
2
Why does Automator get stuck in a loop when processing a large number of files?
1
Use Applescript/Automator to select a window highlighted in the Finder
2
Automator Service to insert text only available when text is selected
2
How to modify text selection in applescript in an automator service
2
AppleScript runs in Automator, but fails when launched via a shortcut
3
How to grant Screen Recording permission to an Automator Quick Action