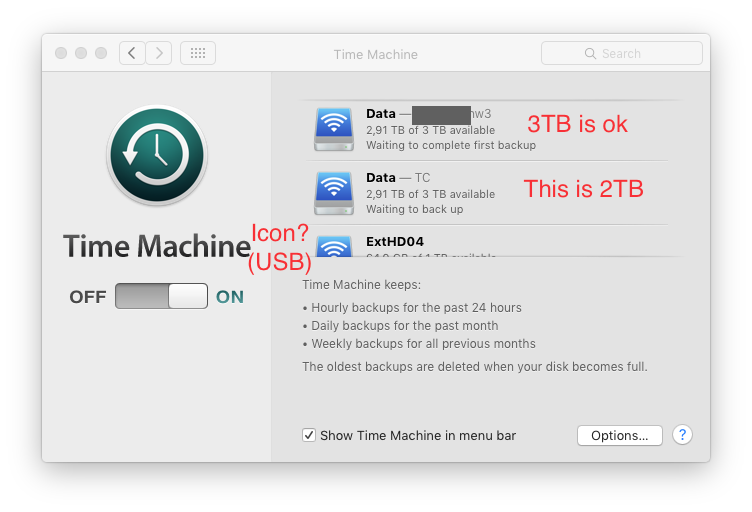 I know, that I added the first, was confused by both showing 2TB and then removed the 3TB one. Interestingly the 3TB remained, but the 2TB was gone. So I added the 2TB time capsule and noticed, that all show as 3TB. (The ExtHD04 is a USB drive, so the icon is obviously wrong for that.) It looks like as if in the settings the destinations are picked by disk name and with two of the same name, it picks just which "comes first".

EDIT: A few backups later I notice this: The display is sometimes correct on my MacBook Air; the display is always wrong on my two MacMini's. This applies to El Capitan 10.11.1 and 10.11.2. I'll file a bug report and see what Apple says. /EDIT

Q1: Are problems to be expected, when two time capsules with the same disk name are in use?

Q2: Is it recommended to rename the disks?

(Never renamed a time capsule disk - I assume one can do it when erasing the disk in the time capsule settings via Air Port Utility.)

I searched for such issues, but all results gave no hint for problems and I got the impression, that this should just work. However, it makes me a bit nervous, as I would expect the backup system not to show such behaviour.

A1: I do believe TM uses UUIDs to identify backup servers. There shouldn't be any issues with duplicate names.

A2: Renaming the disks would probably help you identify it, but it is unlikely that it would solve this problem. As mentioned in A1, TM uses UUIDs to identify disks.

A3: I would try removing the disk through the "Select Disk" button below the disk list (this does not delete your existing backups) and reselecting it.

I would believe that this was likely caused by a graphical glitch.

Not the answer you're looking for? Browse other questions tagged time-machine backup time-capsule .