I have this SD card that I am trying to use to backup photos on a Windows computer.

After using the SD card on the Windows computer, and copying the photos back on a safe drive, I cannot erase the SD card: 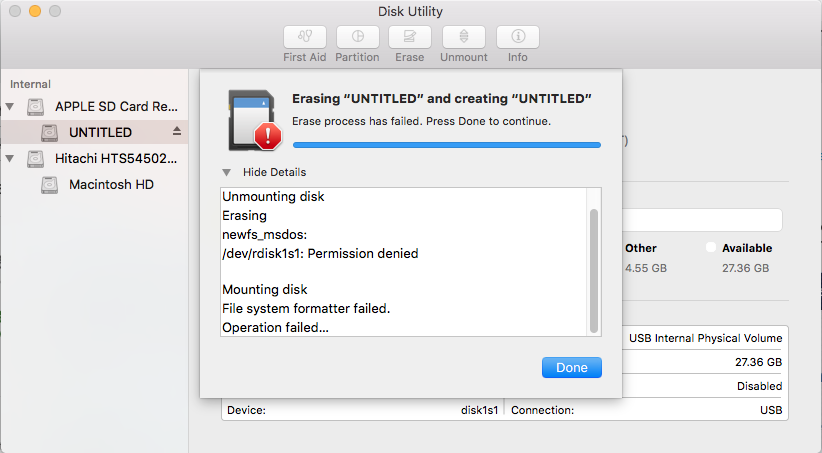 And yep, in the Info window for the card, the device is listed as "read only":

I checked the Lock Tab and it's not on Lock position... What gives?

A better and simpler solution would be using the command-line.

Say the disk name is /dev/disk2. Now format the card to FAT32 by running the following command:

I had the same exact problem. Format your card using this application: https://www.sdcard.org/downloads/formatter_4/index.html

Worked perfect for me.

I had to run

to successfully format a volume on my 64G SD card.

For a reason I haven't yet understood, the card was erased just fine once I used an older version of Disk Utility.

When I inserted the SD Card in a computer running Yosemite, two drives mounted, one called "NO NAME" which I could click on, and one called "UNTITLED" which seemed to be a ghost file or an alias:

When using Version 13 (606) of Disk Utility (so, the version included with Yosemite), the SD Card was erased without any problem.

I am therefore led to believe that the new Disk Utility in El Capitan doesn't work the same way as the previous one, or that it failed at erasing the card in this particular situation.

I faced the same issue. I tried with 8GB, 16GB and 32GB cards and none worked. The trick was in the SD card reader. On the left side there was a switch for physical write protection. Toggling the switch and reinserting the card worked!!

I tried a different SD card reader, and that fixed the problem.

Not the answer you're looking for? Browse other questions tagged macos disk-utility disk-format sd-card .

10
Why can't I write to the last block of my SDXC card on my MBP?
4
SD card is read-only, all Disk Utility options grayed out
22
SD card slot is always read-only
8
How can I make my microSD card writable?
0
Cannot erase and do a fresh install of Mac OS X Mountain Lion on my MacBookPro
1
Is it possible to transfer images from iPhone to SD card directly?
0
USB Drive Not Showing Up in Disk Utility
2
How to expand SD Card disk size (clone smaller SD Card into Larger one)
2
Cannot Erase a 64Gb exFat SD Card with Disk Utility | OS Mojave
1
Unable to format my memory card/SD - error -69877 couldn't open device