How to set network devices priority on afp/smb transfers?

I've got ethernet and wifi in the network devices. I use internet through wifi and file sharing over ethernet (we got an access point with DHCP and an ethernet switch with static IP - the access point and the switch are using two different subclasses) And yes, I got the LAN on the top of the devices priority.

We don't have any NAS, we just use the "File Sharing" feature on OS X. What drives me crazy is the fact that when I click on the server list on the left sidebar in Finder I can connect to other iMacs, but - I don't know why - sometimes I connect through wifi and sometimes over ethernet. I disabled gateway and DNS on the ethernet configuration, and for a while it seemed to fix the problem.

I solve it by disabling wifi, so OS X is forced to use only ethernet. How can I force AFP/SMB sharing to use ethernet instead of wifi? Should I look for some bonjour tweaking? It would be great to block bonjour discovering over wifi.

Below is a network diagram based on what I have read thus far. I have made some assumptions about the IP numbering conventions, but that will have no effect on the overall scenario.

I am assuming that you are using two different subnets rather than 2 different classes of networks. But, either way, you have two very different network IP addressing schemes for your Ethernet network and another for your WiFi Network 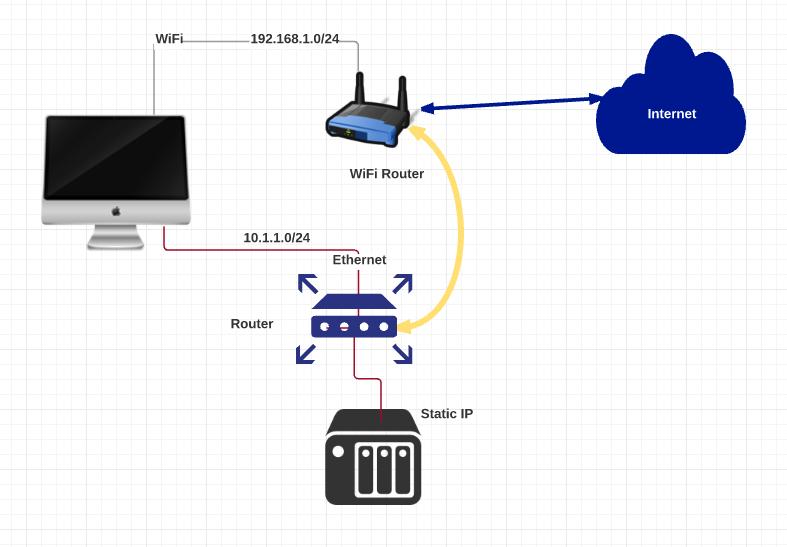 What we don't know:

All of this missing information plays a key role in why network traffic is taking the route it is taking.

"....the problem is that when you try to reach a local resource, sometimes the machines use wifi instead of ethernet... "

The only way that a network adapter will forward traffic from one segment to another is if it knows about it. This means:

We also know that your computer (iMac) is not acting as a router because it already knows the routes to each network. It would NEVER send a file destined for the NAS through the WiFi router unless there was a connection between the two networks.

Why would your iMac choose WiFi for file transfer rather than the faster Ethernet?

The reason for this comes down to response time. If the computer you are transferring to has gone to sleep, it will take longer to respond back than the WiFi router which is always on. That's how your system automatically prioritizes traffic for you - it doesn't look for the fastest to transfer, it looks for the quickest to respond to it's request.

What you have done here is put two network adapters, even though they are addressed completely differently, on the same network. You would expect them to load balance, or prioritize traffic based on destination, but because the two networks literally overlap each other, you are creating a bunch of network overhead.

The easy solution would be to remove the connection between the WiFi router and the Ethernet router (yellow line). This way, neither router will advertise a path you don't want traffic to go down.

(Disclaimer: You can create redundant networks, but that is outside the scope of this document and your question)

This is not a recommended setup. There is no need to create a dual homed, multiple gateway network with Internet traffic and file transfer traffic going on completely different networks. Unless you are running a server which is doing multiple duty as a file server, web server, and Internet proxy, a single connection is more than sufficient.

If speed is that critical to you, look at getting multiple ETHERNET adapters and bonding them together - you will need to upgrade you switch to accommodate this.

If you ARE running a server, WiFi for the Internet has to be the worst way to configure this.

Properly done you can achieve this by prioritizing one interface over the other.

If the shares are in a different network (i.e. behind a router) you have to add a route:

To make this route persistent add a launch daemon on your machines:

Load the launch daemon with:

To make this route persistent on the 192.168.56.x computers add launch daemons similar to the above plist but use

To add a persistent route in Linux check your Linux distro documentation.

You don't specify the clients that connect, so describing those operations specifically might take a lot of work. Worse, your network isn't really defined - so if you aren't using DHCP for both connections on the Mac (assuming you are even running OS X on a mac to share via SMB) - it's even more unclear if my suggestion would work for your specific case.

Thanks for all your answers, especially Allan. Anyway, I will stick with the simplest and more reliable solution: use an AP-client featured Access Point attached to the ethernet switch, so I can connect to the internet through the LAN, without using Wi-Fi. 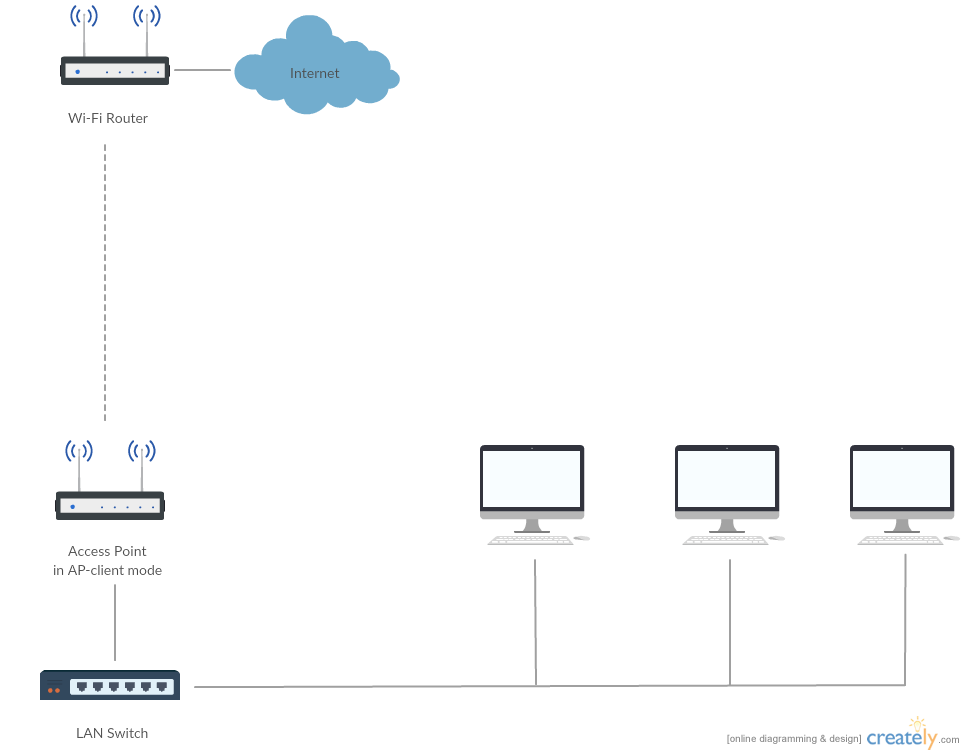 Not the answer you're looking for? Browse other questions tagged wifi ethernet smb afp router .

1
How to connect to an AFP server from a Windows PC?
0
WiFi internet sharing from iMac unreliable
1
Change of IP / Configure AirPort Extreme
1
Connect to OSX via AFP over WAN with a Time Capsule on network?
1
How can I configure OS X server to advertise SMB over bonjour?
1
Unable to mount Time Capsule / AFP-SMB sharing keeps loading
0
Use Mac connected to cable router (no WAN) as the Gateway of the LAN
5
How to set up wireless bridge on same subnet?
1
Can I share network access from Ethernet over WiFi?
0
Is AFP of any value to non-ancient devices?