When copying files/folders from a share on a Windows server to a share on our OSX (10.4.7 Server) using a Snow Leopard workstation. The Linux workstations get "Access Denied" errors.

All users are using the same credentials.

On the OSX server itself, the folder has a little red indicator on it with a line through the icon. Get Info -> Ownership & Permission has "You have [No Access]". 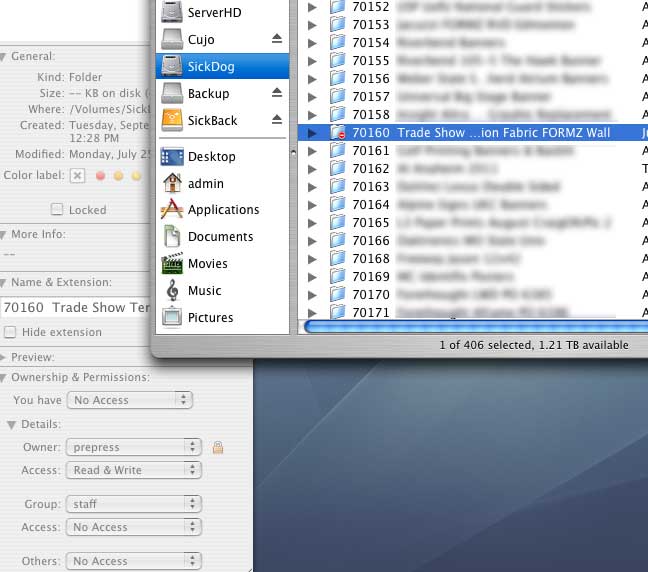 Any suggestions as to where to begin debugging this? Is there anyway for the Snow Leopard users to copy files from the Windows server to the OSX server without copying permissions? (or ACLs?)

UPDATE: By checking "Ignore ownership on this volume" for the volume in question, I am now allowed to access the folders on the OSX server itself. However the Linux clients still cannot access said folders. And this actually locks out the OSX workstations from accessing said folders.

Just open the shared folder in Finder where you want to copy. And open its info tab. In that you will find the permission section at the bottom. In that change the permission to read & write to everybody. I encountered the same problem and I solved it this way. To edit permission you will need super user access.

This probably should have been asked on the Linux StackExchange. But I figured it out.

Our Linux workstations fstab entry was wrong, changing it from smbfs to cifs and adding the uid=linuxuser option to the entry seems to have fixed the Linux access issues.

This does not fix the folder access on the OSX server itself. However, it is not stopping production so I am not too worried about it right now.

Not the answer you're looking for? Browse other questions tagged snow-leopard windows sharing osx-server .

2
Odd permissions issues on Windows Share
7
Cannot access administrative share (c$) on a Windows 8 PC from Mountain Lion
1
Windows shares keep dropping from OS X
2
OSX Server 10.9 File Sharing - not working properly
0
After mounting a Windows SMB share, how can I determine the windows “creator” of a file?
0
OS X Server bound to Active Directory, but OS X Clients who are logged in as AD users prompted for username when connecting to OS X server file shares
0
Cannot share a Windows 7 external drive with a Mac