I'm interested in the latter, I don't need rollback iterations or anything, just a clone of the present.

I ask because the backup drive I just got is not that large, I don't want any space wasted.

Time Machine use an incremental backup approach, where each backup only contains the differences since the previous backup. For a single, changing, file over time, Time Machine keeps state snapshots of the file so you can move backwards in time and see how the file was at previous, different states.

As the disk fills up, Time Machine will purge the oldest snapshots it has. Time Machine will do this opportunistically to ensure that your backup disk always has enough free space to store the next incremental snapshot of your live data it wants to make.

For example, on this Mac, you can see that even though there's over 500 GB of storage used on the Main drive, the Time Machine drive isn't 100% full and actuall stores many, many months of incremental backups: 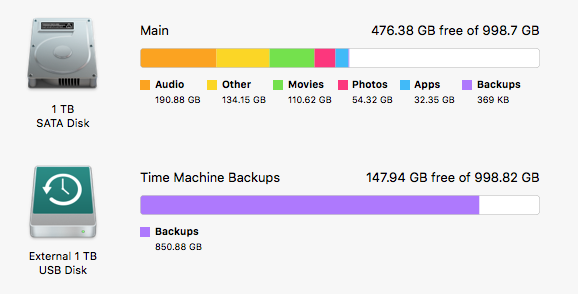 My rule of thumb is you'd like 2x the amount of data you have if you want a long history. But you can get by with 1.5x if all the files on your source drive aren't changing frequently which is true the vast majority of the time.

If you just want to make regular, scheduled, clones of your drive you can use something like Carbon Copy Cloner, which includes a feature for scheduling clones, to take a snapshot of your source drive to a target drive that doesn't contain incremental backups, but is made by taking an incremental update approach. It will only update files on the target if they've changed since the last backup was made and the target drive will only contain the state of your source drive as it was the last time a backup was done.

The following website has a wealth of information about Time Machine:

including this page detailing how it uses hard links to only back up what has changed:

and this page detailing much space you would need on an external drive:

Not the answer you're looking for? Browse other questions tagged time-machine backup external-disk .

77
On OS X, what files are excluded by rule from a Time Machine backup?