This is really annoying when I'm playing league of legends and i randomly can't use skills or click anywhere because shift is toggled on. By the time i notice it's usually too late. I'm wondering if anyone has any ideas what is causing it. I was thinking it was maybe because certain mac commands are still available during the game (league of legends).

I notice i can use cmd + shift + 3 to screen capture. Cmd + q to exit was available until i remapped Quit League of Legends to CMD + option + .

However, it's not just during the game. I also often get similar problems while typing in browser windows.

Is there a way to disable all mac keyboard shortcuts? or could there be some other reason for my problem? i'm tempted to just buy another keyboard to test if it's the keyboard. both shift and Alt have repeatedly gotten stuck on until i repress the key.

My OS is Yosemite if that helps. anyway I'm willing to try anything. I checked hotkeys though and nothing maps to qwer + ctrl/alt/cmd/shift.

I really can't figure out what is going on.

Yes, you can disable Mac's default Keyboard Shortcuts by going to System Preferences->Keyboard->Shotcuts and unchecking them. Select the category from left pane like ScreenShots etc. 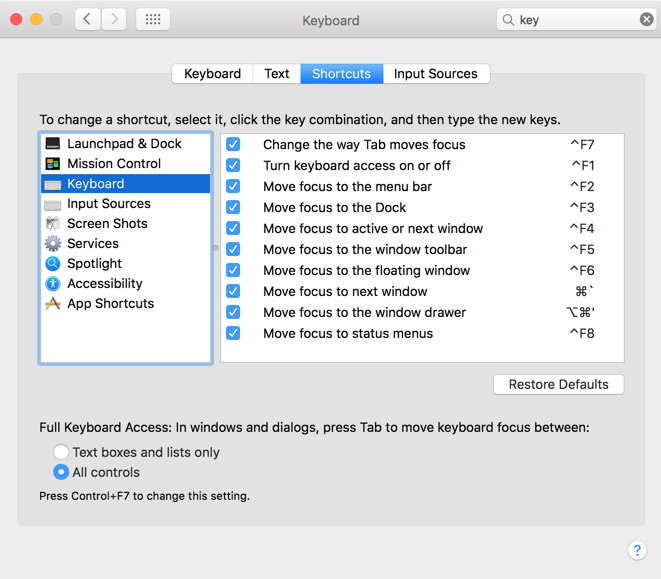 For shift key check if sticky keys are on (under accessibility): 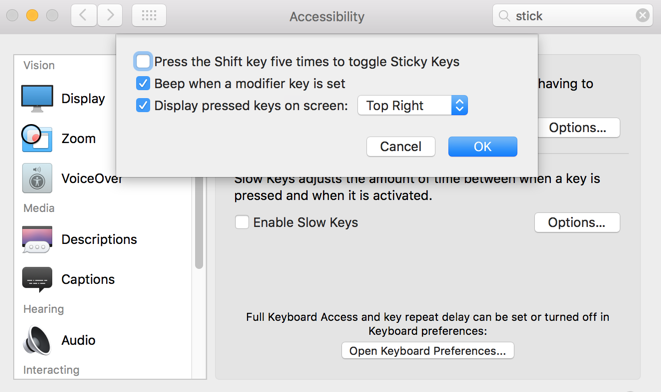 Not the answer you're looking for? Browse other questions tagged macos mac keyboard .

1
How can I swap the shift key with another key?
4
How can I automatically focus Finder windows after CMD-TAB to one in a different space?
4
How to display the current mapping for keyboard shortcuts in realtime?
2
'alt vs option': Is the 'option' key still used somewhere? Where exactly (geographically)?
1
My Mac keeps adding double spaces randomly when I type
0
“t” key always pressed on mac
1
My Macbook Pro is acting as if the SHIFT key were pressed when it absolutely isn't