Exclude Music from Matching by Apple Music or iTunes Match

The matching algorithm Apple uses is very aggressive and will many times mismatch music from my library no matter how well tagged it is. This is a nuisance for many and the information on how to remedy this is poor. How can you force music in your iTunes library from not getting matched in the cloud?

After much testing the best solution I've found is to mislabel the track and album name. This is by no means optimal but at least it leaves the artist name intact so that the sorting stays neat without duplicate artists. Doing this manually for each problematic album would be a PITA but fortunately it can be automated to a high degree using MusicBrainz Picard.

In order for a track to bypass the matching algorithm it needs the title and album tag to be mislabeled with a character/number and a symbol before and after the name (and without any spaces). A track named Autumn Fog Lifts would for example become 0.Autumn Fog Lifts.0 if using my own personal syntax where I insert 0. before and .0 after.

Using Picard, one can set a script to do it like this: 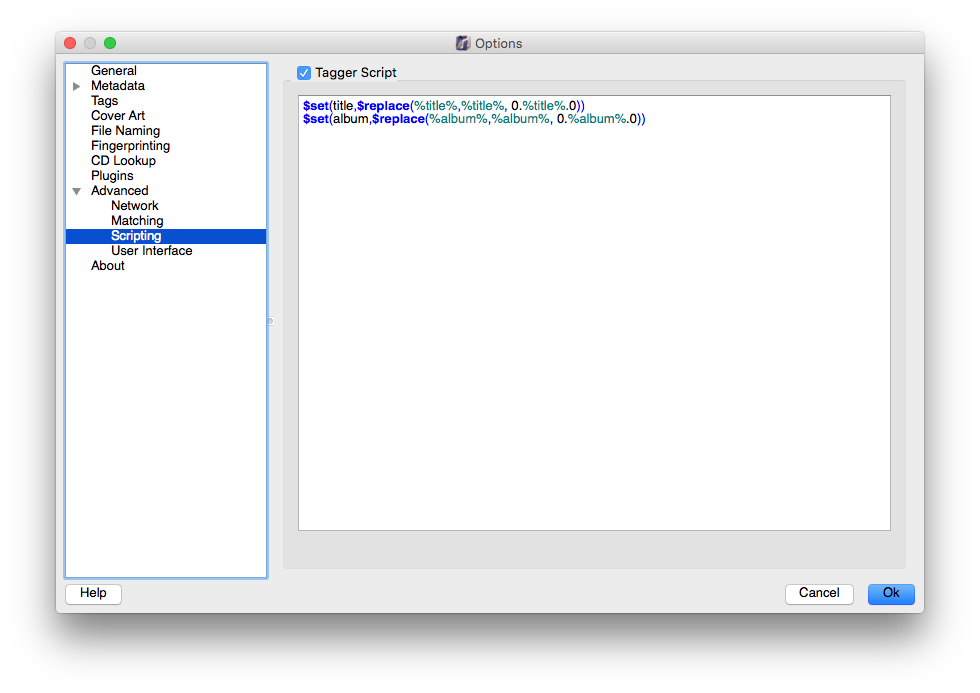 This will add 0. before and .0 after. the title and album tag whenever music is added to Picard.

This is my recommended workflow of how to replace the mismatched music in the cloud:

For more information on how Picard works see How to Tag Files.

Not the answer you're looking for? Browse other questions tagged itunes music itunes-match apple-music .

0
iTunes Match on iPhone missing almost all of my music
1
High quality music in iTunes Match
0
No longer an option to upload to iCloud with iTunes Match and iTunes 12.2.2?
4
What will I lose if I let iTunes Match expire, and instead subscribe to Apple Music?
1
Can you trick Apple Music/iCloud Music Library by labeling music files as audiobooks?
1
Does iTunes Match just 'match' your library with songs in the iTunes Store?
1
How to use movement for classical music with Apple Music?