No 3G but have wifi- have been on phone with apple and provider for 5+ hours total. Ideas?

I have an iPhone 5 that does not take a sim card. It is programmed for StraightTalk which goes through Verizon towers. I've had it over 2 years- finally got the sleep/wake button fixed since that's been a problem and known issue. When I got my phone back, I could no longer access 3G (so no iMessages unless I'm on wifi, no group msgs or photo msgs ever, no web without wifi).

My iOS is up to date. I've called the sat programming repeatedly to update. I took it into a store to check settings. I've been on the phone 4 separate occasions with providers and Apple (who did a remote check through computer and there are no hardware issues- I was told wifi wouldn't work either if there was). The provider walks me through the same basic steps each time checking dumb things like airplane mode. They always wind up, an hour later, telling me that everything is "fine on their end" and my account is "well provisioned" and it should be getting data. Well, it's not. Sometimes, they say they'll transfer me to someone else to try to fix it and then they hang up.

This phone doesn't use a sim card, never has, and a card won't work in this type of phone. (I even tested this once with provider and it made nothing work instead of just no 3G.)

I have a friend who had the same issue with the same provider and they said eventually the ST people transferred them to Verizon and they reset something there. So far, I can't get anyone to listen to me to try this, and when I went into Verizon they said it wasn't their problem. The friend didn't have any other specifics as to what the issue was so I can't tell anyone what they did. :/

If anyone out there can help, I'd greatly appreciate it. Seems like a waste to have a smartphone where I can't ever check mail when I'm out (or use browser to look things up or find my way). It's really disheartening to get nowhere after so many hours on the phone with people who don't seem to really know their job other than what the screen prompts them to ask.

I'm not sure if you said where you got your phone fixed (I double checked, but I could be missing it), but who fixed it? Was it Apple, a friend, a repair shop? It sounds like something could have been either damaged or disconnected and not reconnected correctly in the repair process.

If you have done a full restore to the device (both from an iCloud/iTunes backup and set it up as a new device) then it is probably damaged physically. You need to contact whomever repaired the sleep/wake button.

What I would do is see if the Straight Talk rep will send you a Verizon nano-SIM.

This phone doesn't use a sim card, never has, and a card won't work in this type of phone. (I even tested this once with provider and it made nothing work instead of just no 3G.)

The iPhone 5 takes a nano-SIM card. The only to date that never took any SIM card was the CDMA (Verizon) iPhone 4. Additionally, though you can use 3G with your iPhone 5 without a SIM, you can't use LTE without it and LTE is much faster than old 3G. 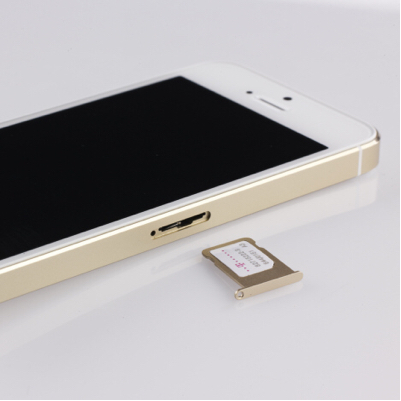 Yes, the iPhone in the picture is a 5s (note the gold color) and a GSM one (note the T-Mobile SIM), but as far as the SIM card is concerned, everything's the same there as for a CDMA iPhone 5.

1
Unlocked iPhone 5 on Verizon
0
Unsure of how to achieve my usage scenario with a repurposed iPhone
0
iPhone 3GS no sim error
0
Can I use a different carrier with my iPhone 4s received from provider?
4
Will Apple Store employees activate my new iPhone?
0
iPhone 6 can't find network
1
Carrier SIM card and unlocking issues...
0
Changing sim cards on iPhone 5s