After restoring my iPhone from an iCloud backup, all my photos are greyed out. How can I get them back?

I got a new iPhone 6 a while ago, and after restoring from an iCloud backup over wifi, all of the photos/videos in my Photos app show up grey.

It's as if my phone knows the photos should be there, but doesn't have the actual data for them. It also seems to know which ones should be videos, and even has their duration, but no video data is actually present. Maybe it only has the meta-data?

The Photos app doesn't crash if I try to view them; they just show up grey. I've taken new photos since then, and they show up okay in the app, but the old photos remain grey.

Here are some screenshots of the Photos app from my iPhone: 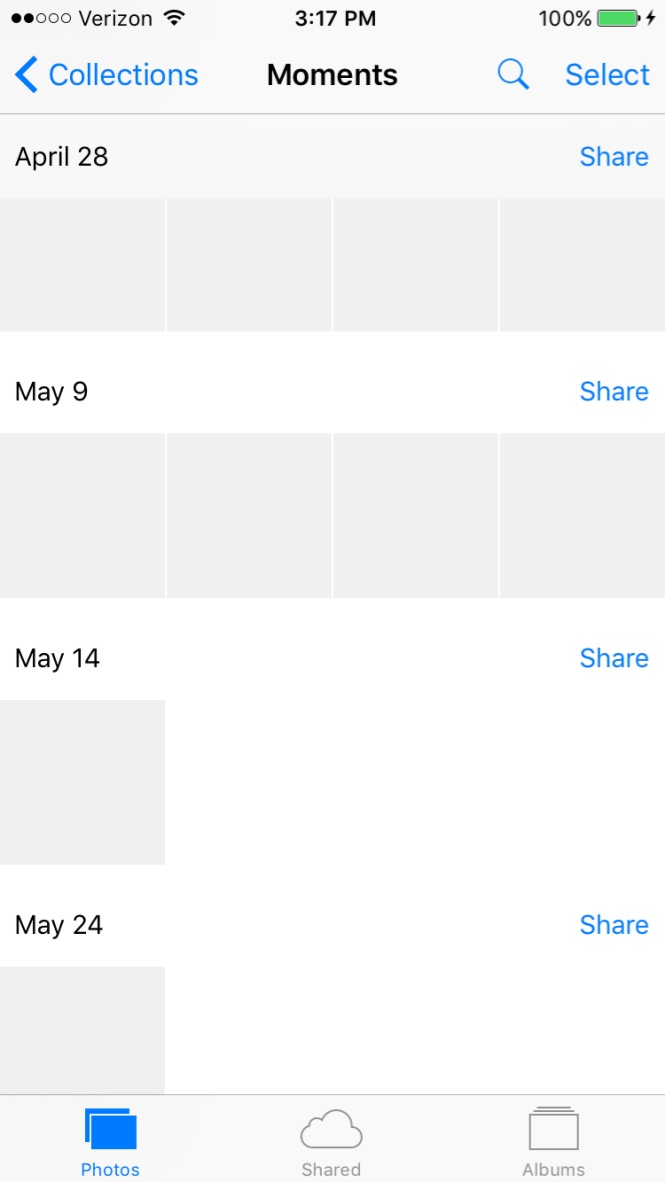 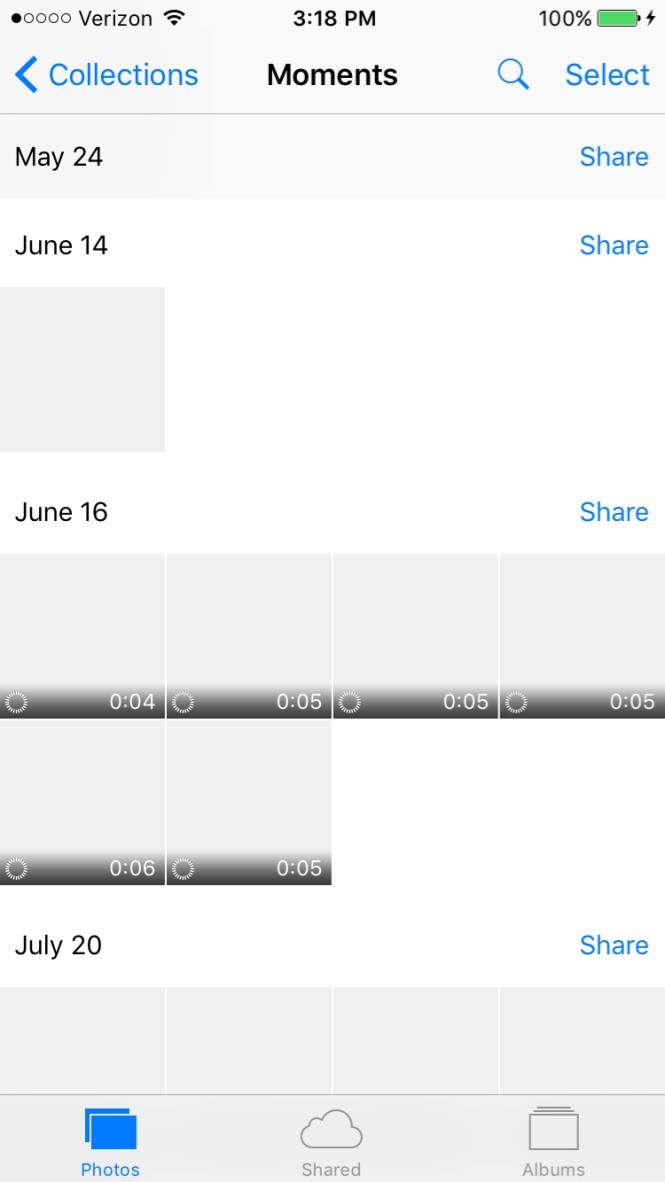 Here's some background information to give you some context around my problem.

It's Sept 27 and it's time to upgrade to a new iPhone. For whatever reason, I decided to backup my iPhone to iCloud over wifi, instead of connecting my phone to my computer and backing up via iTunes like I normally do. I'm not sure if it was running iOS 8.4 or 9 at the time I made the backup. I got my new iPhone, which I think was on iOS 9, and I restored it from my iCloud backup over wifi.

The restore seemed successful, but all of apps still said "Waiting...". My phone sat there for hours and hours but nothing changed. Maybe Apple's servers were just busy due to everyone upgrading to the newly released iPhone 6s. Thinking something was wrong, I wiped it and tried to restore it again from iCloud backup, but the same thing happened.

Eventually over the next day or so my apps finally download. Everything seemed okay until I noticed my photos hadn't turned up yet: they were all grey as pictured above. Maybe they just didn't download yet? I waited a week: still nothing. Finally after about a month of procrastination, I decided to post a question here as you are reading now.

At this point I feel like I did something wrong and iCloud didn't backup my photos. The old iPhone has since been wiped, so no chance to get them back from that phone. At least I have a backup on my computer as recent as June 29, so if I restore from that I'll only have lost about 3 months of photos.

Now what made me decide to post this question instead of just restoring from that backup is the hope that there's something I can do to get them all back. Maybe I'm forgetting something and I can still get all the photo data from my backup.

I'm also curious to see if anyone knows if I did anything wrong when I tried to backup/restore via iCloud. Maybe I had an incorrect iCloud setting; I don't really know. When I made my iCloud backup, it said "Photos" was ON. Did I have to switch "iCloud Photo Library" ON too?

Here's some screenshots of my iCloud settings: 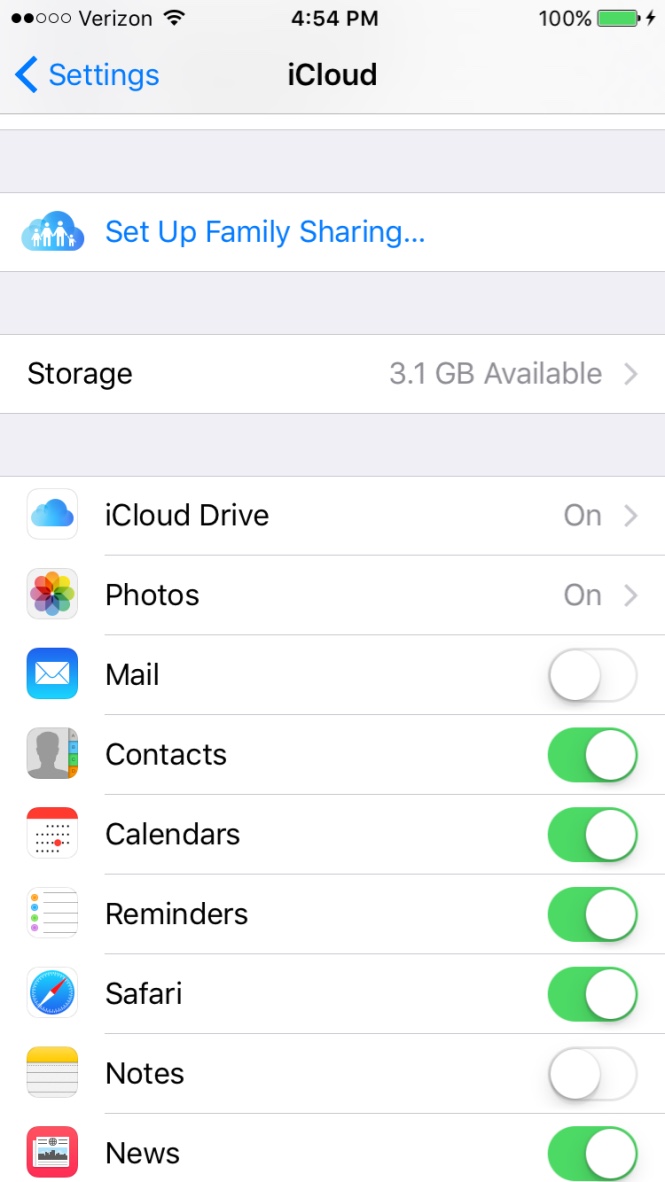 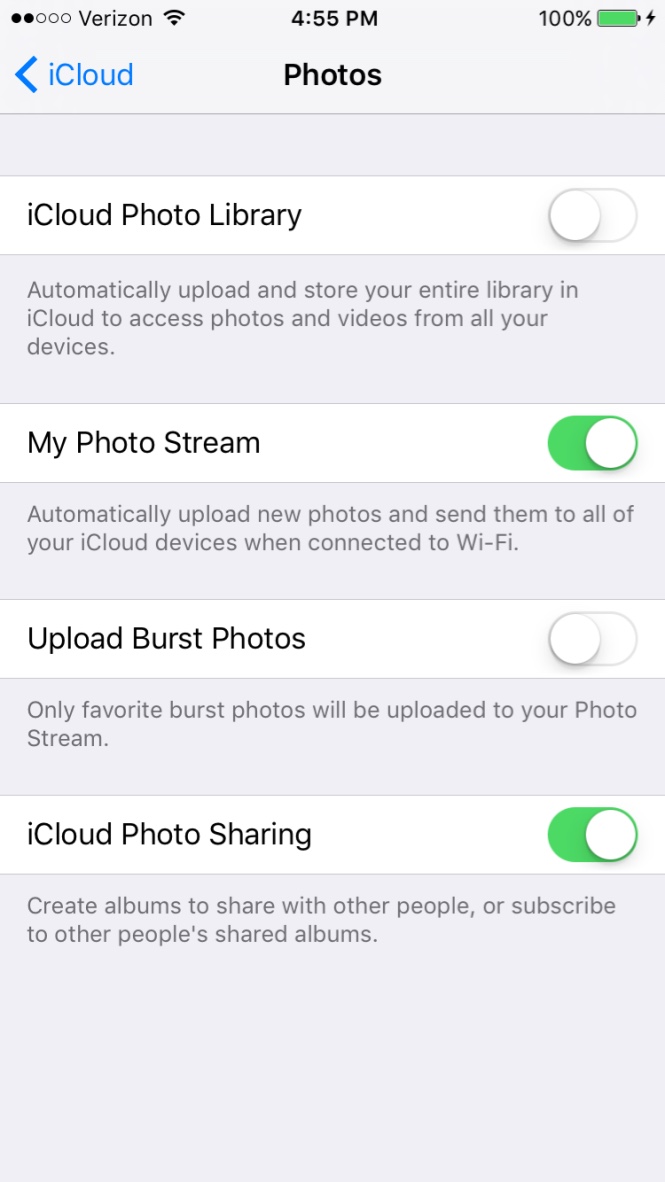 So at this point, is there any way to get all my photos back into my Camera Roll? Did I do something wrong when I backed up to iCloud?

Here's how I sit now:

Turns out I solved the issue by just wiping my phone and restoring it from that same Sept 27 iCloud backup again. It had the photos in the backup after all. As to why it didn't download them to my phone when I restored from that backup a month ago, I'll probably never know.

Before I actually wiped/restored, I wanted to make sure that the backup actually had the photos in it. Of course Apple doesn't let you see the data in your backups, so I had to download a 3rd party backup viewer on my mac to look at the pictures in the backup file. Once I saw the photos were really there in iCloud, I decided to just restore from that backup and see what happens. It ended up working. Weird.

I have the same issue going from iPhone 5 with 9.0.1 to an 6s with 9.0.1. Most of my photos returned as grey. I ended up just sending all the ones I wanted to keep to my new phone via AirDrop.

Not the answer you're looking for? Browse other questions tagged icloud backup restore .