Restore from Backup: Apps in iTunes library were not installed on iPhone because Unknown Error occurred 0xE800002D

I posted this weird copying behavior here:
Issues & Errors with Restore from ios7 Backup to ios9 on iPhone 5?

The screenshot of error message below is from this thread from Apple forums. 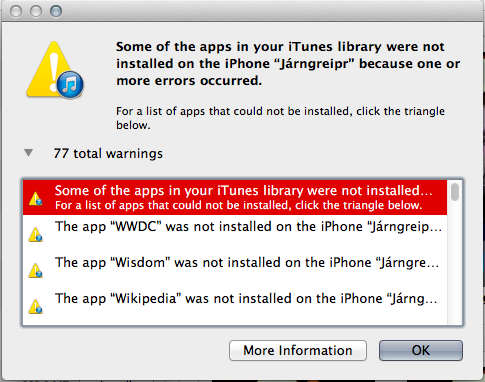 I get a similar looking error message, but with 200+ errors (as posted with details below):

So I split & posted this Error Message separately to solve this issue.

A few 'tries' of Restore from Backup & Sync, I observed some of the following behaviors:

I don't mind taking manual steps to resolve this as long as there is some way.

Found some posts that talk about this error, but they are old and not sure if connected.

Try installing those bugged apps direct from the App Store, as opposed to relying on the backup package.

Use the backup to get your own content (photos, messages, etc), and ignore the apps. Download them fresh from the app store.

This has been a pain since the move to iOS 9.

There is not ultimate fix for this, but these are things I've found that helped in various combinations and order. I will update this answer with additional workarounds whenever I come across them.

There are some grave issues with Apple's iTunes Sync with iPhones and made even more grave with recent App Slicing and iCloud integration, we'll have to reply on Trial and Error some of the above on this.

And for a 64GB iPhone, given that neither the USB 2 speed connection or the WiFi speeds are good enough or fast enough to Backup and Restore the data (It took my iPhone 64 GB 12+ Hours to do a Restore from Backup and was still faulty), so when iPhone's can sync at USB 3 SuperSpeeds, we might have a better experience.

Not the answer you're looking for? Browse other questions tagged iphone itunes applications data-synchronization error .

2
Issues & Errors with Restore from ios7 Backup to ios9 on iPhone 5?
1
Errors while syncing iPhone