Issues & Errors with Restore from ios7 Backup to ios9 on iPhone 5?

During the iPhone Restore from Backup:

iTunes auto created multiple backups for some reason - Which Backup to use for restore now?

Which Backup to use for restore now?

After the iPhone Restore from Backup:

Sync is stuck for several Apps that are in "Waiting" "Will Install" state as outlined in this split question.

Restore from Backup: Apps in iTunes library were not installed on iPhone because Unknown Error occurred 0xE800002D

How to Resolve stuck "waiting" "Will Install" Apps?

Additional Details on Backups & its Copies:

New Backup folders are identical to original Backup except for the following:

Screenshots of Backups Folder with Timestamps & Comparisons (using Beyond Compare):
Images will not show clearly until you click to Zoom in. 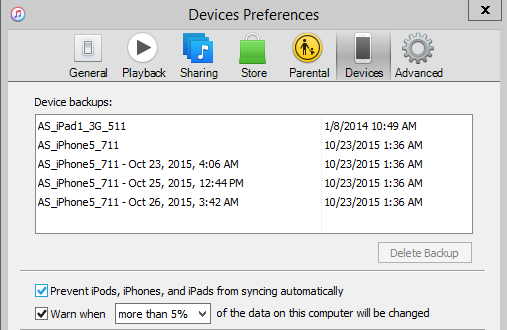 When you see two backups for the iPhone, there is one automatically from sync and one you did by hand by "Backup Now". I would choose that one, it is the one marked with the precise date. Note: auto backups (sync) are overwriting the earlier one.

Not the answer you're looking for? Browse other questions tagged iphone itunes backup data-synchronization restore .

3
Restore from Backup: Apps in iTunes library were not installed on iPhone because Unknown Error occurred 0xE800002D

2
Restore from backup on iPod touch issues
3
Why can't I restore apps to iPhone 5 from 4s?
3
How can I prevent a forced iOS7 upgrade when restoring iPhone 4s from backup
3
Restore from Backup: Apps in iTunes library were not installed on iPhone because Unknown Error occurred 0xE800002D
3
How to selectively restore save game data from old iphone backup?
0
iPhone 6s: apps greyed out after restore from another phone's backup
1
Can't restore from iCloud backup in iOS 10
0
Problems in restore backups to iPhone from PC