I upgraded my Yosemite to El Capitan few days ago. Also recently Paragon sent me an e-mail with an offer of free upgrade from version 12 to 14. Since I bought ver. 12, I decided to install version 14. As an existing customer I was given a new serial number and I did the activation - everything went good.

Today I plugged my USB hard drive with NTFS partition as usual (the same disk I used before - nothing has changed). Now Paragon doesn't see it. OS X does. I can read but I cannot write. Am I missing something? Version 14 is fully activated. 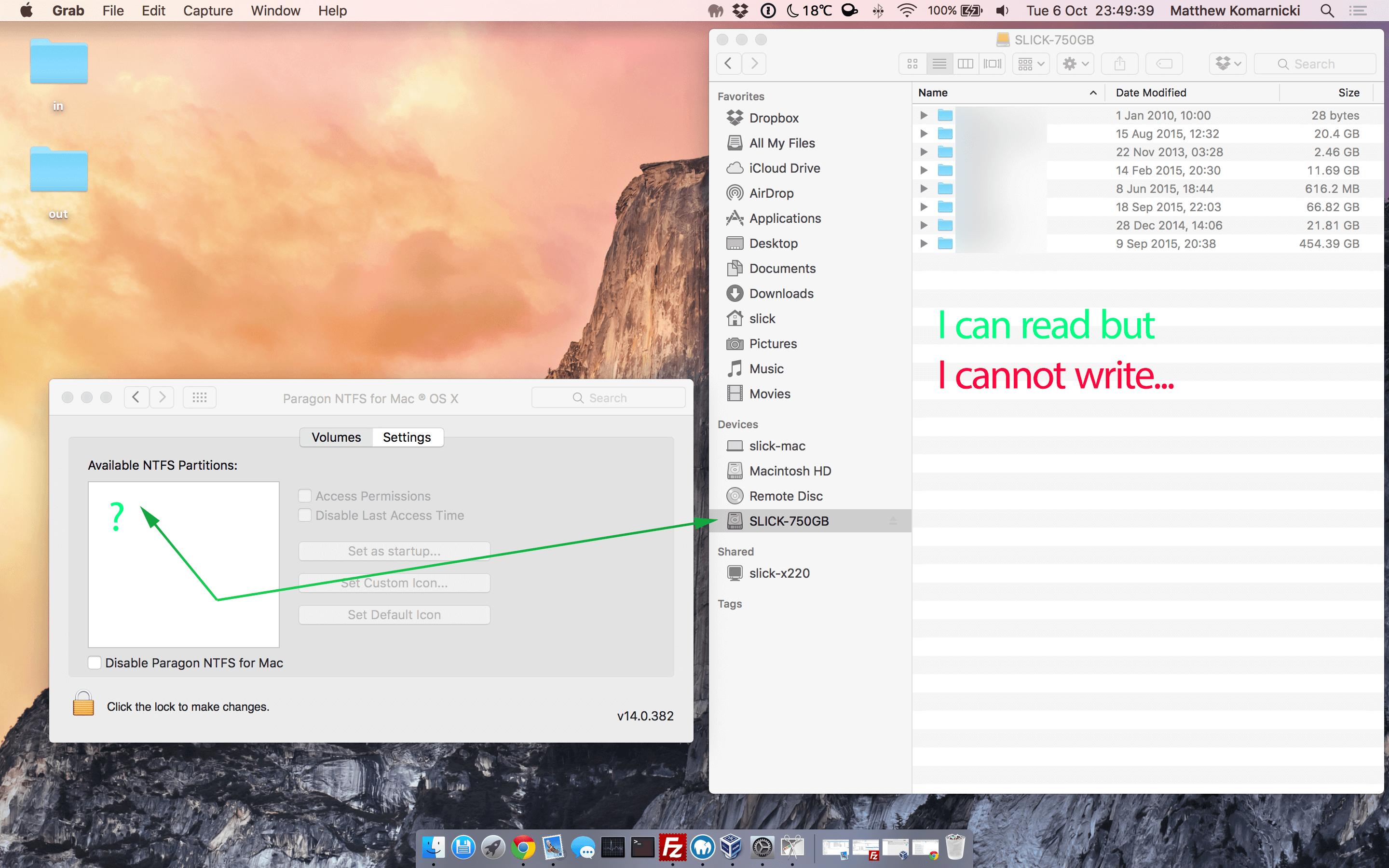 EDIT: Link from Paragon makes no sense for me. The reason why I bought this software was to avoid triggering any additional commands. I just want to use my NTFS partition as before in Yosemite. I want to plug in my USB with NTFS and simply put something into it. No formatting (I have stuff on it), repairing etc... :/ Anyone can help? Now this software does nothing.

Make sure you have version 14.0.382, previous 14 versions had that problem. I had this problem with the version I downloaded from the Paragon free upgrade link. I solved that problem by downloading the 14.0.382 from their website. Strangely the new version didn't show up clicking the "check for update" button on Paragon NTFS preference pane.

Also am having dreadful problems with NTFS v14 & Paragon's licensing system, sorry I bought the thing. Have written to support several times now, with no answer (which to my mind, means they know they have problems here):

Am running on Yosemite as primary boot (with another on a El Cap disk):

1) v.14 will nor register, claiming it doesn't know my user account details;

2) conversely, logged into my Paragon user account where I can see all prior registrations for vs 10, 11 & 12, but cannot register v14 and says the s.no is invalid.

3) tried to uninstall v.14, then on re-boot the drive won't start (hangs, with mac stop sign);

PITA. Not only will version v14 not register against the s.no, it will not see the boot camp disk because it somehow corrupts by boot drive & so the process goes around in circles. Never had any of these issues with vs 10-12, but would seem that Paragon NTFS is far less benign to the mac boot disk than I would have imagined.

Would seem that the only next choice would be to re-format and clean install a new system & apps from scratch & get rid of Paragon NTFS altogether; find another NTFS solution. Such a time waste of life.

It sounds like a permissions issue. In Disk Utility, run the "Fix Permissions" function on the drive and see if that helps.

You need to check the permissions in your Paragon.app (control click, read information i guess) you'll find what you're looking for in the end. 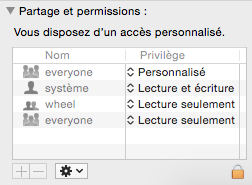 Click on the lock to make the necessary changes.

If you can't change those values you may need to disable System Integrity Protection - SIP (which is activated in El Captain by default) by booting into single user mode and running csrutil disable.

Could you please collect "sysdiagnose" logs and submit it to feedback@paragon-software.com? We will investigate an issue and provide you with solution.

The command-line utility “sysdiagnose" can be triggered by pressing Cmd+Opt+Ctrl+Shift+Period, and it may take a few minutes to complete. When ready, the output will automatically be revealed in a Finder window (or it can be manually retrieved from /var/tmp).

Not the answer you're looking for? Browse other questions tagged hard-drive partition macos ntfs .

1
Upgrading a boot camp machine to Lion
25
Cross-Platform File System file sharing between MAC, WINDOWS, LINUX?
1
Can't see FAT32 and NTFS external partitions on OS X El Capitan when SIP is enabled
2
NTFS partition on external HD not recognized or mounted on El Capitan or Sierra, even with latest Paragon or Tuxera
0
(Mistakenly) Deleted all partitions except for disk0s2, can't mount or repartition