Is there any way to block automatic IOS updates?

I know my personal devices (iPhone / iPad) wont install updates automatically but it is downloading them automatically even with the settings turned off. What can I do to prevent automatic downloads of these updates so I can conserve my data usage?

Google-fu would seem to think the only way is to keep your device too full to take the download.
You can prevent it from downloading over 'mobile data' but not if it can see WiFi.

To prevent mobile downloads, go to Settings > App & iTunes Stores & disable the Use Mobile Data option.
The specific types above are to prevent the phone downloading other data types at all - meaning you will need to update via iTunes on your computer.

None of those options will prevent an iOS update from downloading [even Updates, which you may think would be the one] but the Mobile option will prevent it using your phone's data plan. 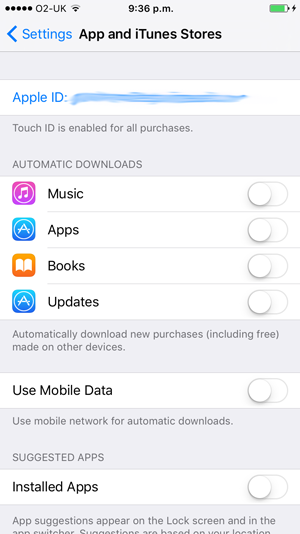 There are two additional ways you can accomplish this without jailbreaking, which is highly undesirable for security reasons.

The first (poor) way is to ensure the device does not have enough disk space remaining to install the update. This method will prevent the device from updating and showing updates, but at the expense of only having limited space for data at all times.

How it works: The configuration profile instructs your device to look for iOS updates from Apple's TVOS update servers instead of Apple's IOS update servers. When IOS gets notified that the TVOS server has an update, it checks to see if the update is appropriate for the phone (which it is not -- it's a iPhone, not an Apple TV!) and then refuses to install the update. A side effect of this behavior is that the iPhone no longer checks Apple's iOS servers for updates...

If you're open to jailbreaking your devices to achieve this, there are some tweaks you can install that will help. On my iPhone 5 running iOS 8.4, I have Mikoto installed, and among its smorgasbord of features includes disabling the OTA software update abilities included in iOS, which will prevent downloading of future firmware files. In my experience, it's worked great so far.

Not the answer you're looking for? Browse other questions tagged iphone ios ipad software-update .