Are there any deep details on the specifics of what the “Low Power Mode” in iOS 9 actually affects?

So as mentioned in this canonical question and answer thread on iOS 9 features, “Low Power Mode” is a good thing. This is what iOS 9’s blurb on “Low Power Mode” explains it does when activated:

Low Power Mode temporarily reduces power consumption until you can fully charge your iPhone. When this is on, mail fetch, background app refresh, automatic downloads and some visual effects are reduced or turned off.

Okay, I get the gist of this. I understand the broad concepts. But is this really all that happens in “Low Power Mode?” For example, what are the exact visual effects which are “reduced or turned off?” Are there any more specific details from Apple on exactly what “Low Power Mode” does?

Apple hasn't really discussed specifically what Low Power Mode actually does. Its main underdocumented feature is that it underclocks the processor, reducing performance to increase battery life, but there's a few other tweaks it makes to the system as noted underneath the switch.

As shown in these screenshots, Low Power Mode reduces the performance by ~30%. 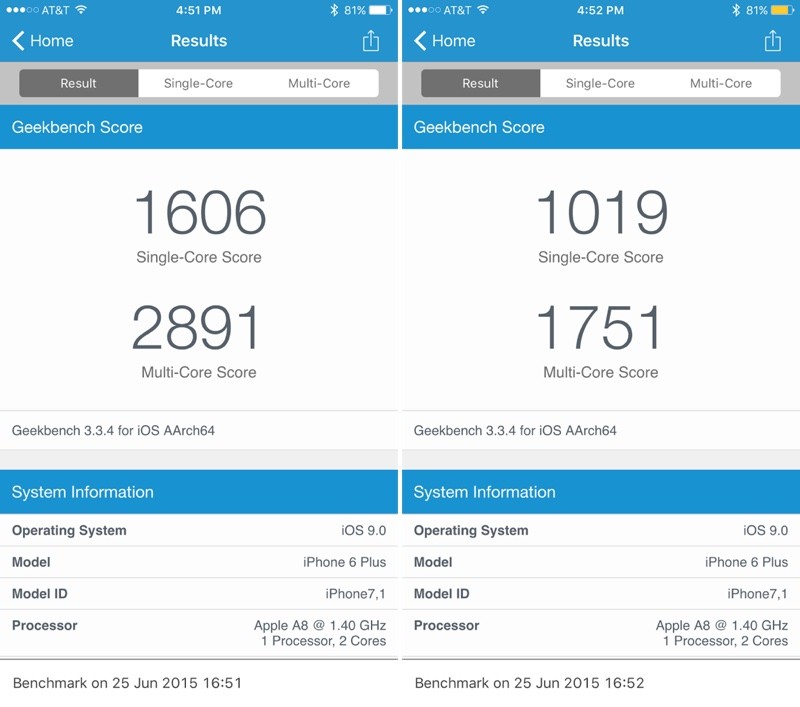 Apple encourages developers to take advantage of this feature by implementing a lower power state in their apps. This means that this feature may increase battery life through support in third-party apps.

Your app should take additional steps to help the system save energy when Low Power Mode is active. For example, your app could reduce the use of animations, lower frame rates, stop location updates, disable syncs and backups, and so on.

Not the answer you're looking for? Browse other questions tagged battery ios .

0
Why does a Double Hard Reset help with iPhone issues?
6
Is there a shortcut for activating Low Power Mode in iOS 9?
7
Persistently or aggressively enabling Low Power Mode
1
How can iPad battery remain on 100% charge over night?
0
Tell iPhone that this wifi is a hotspot so it doesn't download 1MB/s for no reason when idle
6
On iOS, is there any way to see what the “Documents & Sync” system service is using cellular data for?