So I did a screen recording with QuickTime using OSX 10.9.5. I was recording a video with sound. However, when I played it over from QuickTime, the sound was gone. How do I make it that QuickTime also records the sound?

To add external audio sources, you need to make sure the correct input is assigned before you start the recording 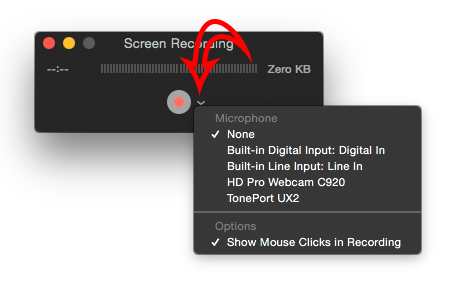 To record "in-computer" sound, you need software that can re-route audio within the Mac itself - to make it think an output is actually an input.

This has been traditionally done using a freeware app called Soundflower - originally by Cycling 74, taken over by Rogue Amoeba but not developed or supported further. Rogue Amoeba have always had their own system for intercepting Mac audio & routing it to chosen destinations, but their app, Audio Hijack, is not free ($50)
It is extremely good, but comes at a price.

Quick tutorial on Soundflower in Quicktime from CNet

When a situation arises where you want to record the audio along with your screen recoding on your Mac, you could try raising the volume on your speakers and hope that a built-in microphone captures that audio, but that's far from elegant.

Instead, you can use Soundflower. It is a free piece of software for Mac OS X by Cycling74 that will let you route system audio within your Mac. Download and install the utility; Soundflower requires you reboot your system after installation for it to work.

What this does is route all of your system audio out to Soundflower as if the utility were speakers or headphones. That means any sound made by your Mac (including Facebook notifications or similar) will be recorded by QuickTime Player.

Now you can hit record in QuickTime Player and you'll capture both the video and audio in one recording. While this is going on, you won't be able to hear the audio to monitor what's being recorded. When you're done, change your output audio back to your original settings in System Preferences.

Not the answer you're looking for? Browse other questions tagged macos macbook-pro quicktime .

2
How do i stop Quicktime from opening previous videos?
1
is QuickTime available on OSX 10.9.5?
141
How to record both screen and sound with Quicktime on El Capitan?
1
Catalina Beta 5: Quicktime Audio Recording Not Working on 2018 Macbook Pros
20
How to record screen with the audio coming from your Mac?
2
How do I Reauthorize Screen Sharing for Quicktime?