Why should disabling wifi on Router speed up internet connection?

I'm having an odd issue with my home network.

I have a TPLink Archer D7 connected to my phone line and wired to an Airport Extreme in my basement.

Each of these is connected (by cable) to a MacMini.

We have 3 x iPad, 2 x iPhone and 1 x AppleTV that connect to the 2.4GHz and 5GHz wifi networks. Mostly to the Archer D7 but also, less frequently, to the Airport Extreme.

The problem I get is that from time to time my internet speed becomes horribly slow. Impossible to stream video.

What I have discovered is that if I disable both WiFi networks on the Archer D7 then the internet speeds go straight back up to normal (acceptable to good for video).

This happens when none of the connected devices are in use, or they maybe in use for games that do not require an internet connection.

When the Archer's WiFi is disabled the devices automatically connect to the Airport (which is just within range) and can be used as normal without disrupting the internet speed. So unless they are causing some sort of priority setting on the router then I don't see how they can be choking the connection.

I have SSID broadcast off and have strong WPA2 passwords on all networks. I have MAC addresses set for all devices, filtering on and no guest networks enabled.

I'm starting to think it can only be someone piggy-backing my connection but I'm not sure what else I can do about that (if it is the case).

Do any other possible causes of this type of problem spring to mind?

I have no idea if this is an Apple specific problem because I have no non-apple equipment I can use to check it.

Turning off the main WiFi is a pain because without that network I can't use my AppleTV.

An alternative diagnosis is that since you are using a full range of encryption and filtering on the Archer D7 you are maxing out the processor. The TP Link specs suggest the processor is single core (usually manufacturers tout dual or quad core when available).

The easiest way to deal with the Apple TV would be to hardwire it using TP Link's own powerline adapters (only about $30/pair for 500 Mbps version, other brands are available but TP Link are the least expensive first rate powerline adapters and the one's I'm using at both home and work) which would allow you to use the Airport Extreme for your wireless knowing that your Apple TV is sipping directly on a reliable wired connection.

You could equally move the Airport Extreme to a better position in your home using the TP Link powerline adapters. I've lived with separate wired ethernet routers and wifi access points for years at a time (principally with Airport Express routers which burned out regularly alas but worked great while they worked).

I've been building networks at work and at home for fifteen years with up to forty live users at a time. Out of the hundreds of hours spent troubleshooting these various networks, about ninety per cent of the time has been spent troubleshooting wifi. Apple in particular has not always been compatible with the standards to which Airport promises compatibility. The less wifi you can build into your networks, the less time they will take to maintain.

If you do want to keep trying with the wifi on the Archer D7, I'd recommend:

If the wifi passes the tests without encryption, then you can gradually turn on encryption first and then filters, step by step, ready to undo whatever settings cripple performance.

As you are concerned about piggybacking, you should be able to monitor in the Archer D7 interface what devices are connected via the DHCP server menu item. 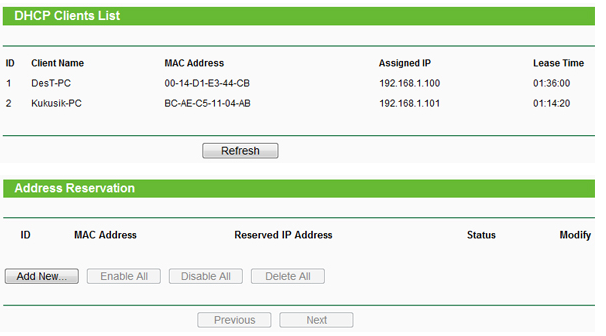 Just make sure to go and check when you find your network has slowed down. You can also monitor what connections are active. Unlike Tomato firmware, I don't think you can monitor bandwidth per connection via TP Link firmware.

Something else to keep in mind is that routers go bad all the time. They small closed plastic boxes which run hot. Make sure to give a router the best ventilation you can. Even then you should expect two years of 24/7 use to cook the circuit boards. As you've learned, even the slightest router flakiness turns a household or a business upside down. Always keep a working backup on site (can be older generation 100 BaseT for emergency service). The only routers I've had which have stood the test of time are industrial strength routers in much larger cases (also TP Link btw) which are generally two to five times the price of the consumer routers.

Buying middle of the road and upgrading every couple of years is the most economical way of keeping close to state of the art performance, while maintaining working backups on hand. If you just leave the old router configured exactly as it was when you remove it from the network and you don't not remove the wifi credentials from your computers you can just drop the old router in any time you like with zero downtime.

Not the answer you're looking for? Browse other questions tagged network wifi airport .