Everything was alright until I installed and then uninstalled Git following instruction in the uninstalled.sh file in official git.zip file:

I have no idea what I've done with git would affect Alcatraz. Once I click Package Manager in Xcode I get this error: 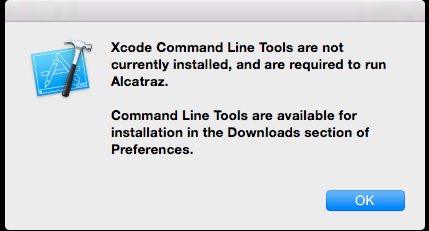 Even re-install the Alcatraz it's still there.

Here's the message I got:

The Warning still pops up.

How could I fix this?

After installing git-2.5.3-intel-universal-mavericks you have at least three git executables on your Mac:

If you've followed the instructions in the README.txt inside the git-2.5.3-intel-universal-mavericks.dmg you probably renamed the original git stub:

You may now whether rename git-system:

to fix your issue.

Not the answer you're looking for? Browse other questions tagged macos terminal xcode .