I have a problem with my Time Machine backups. I have two harddrives in my MBP and I unmonted my spinning harddrive once bc I was studying and it was getting annoying. As I knew I would need no files from my 'data partition' I resumed with only my SSD. When I mounted the harddrive again everything was working as before.

But since then my Time Machine is acting up. Whenever I want to backup it says that I dont have enough space and it would require ~660GB of additional space for the backup which accounts for my total amount of backuped data. I only have a 1TB backup volume, but that's more than enough space usually, so I think it is not doing incremental backups anymore.

I tried to use tmutil to fix some things. I tried

but it didnt change anything. Also when runing tmutil compare it would only show a difference of 8.3GB (last bit of output: http://pastebin.com/raw.php?i=NhmZkfM6) instead of the reported 660GB. 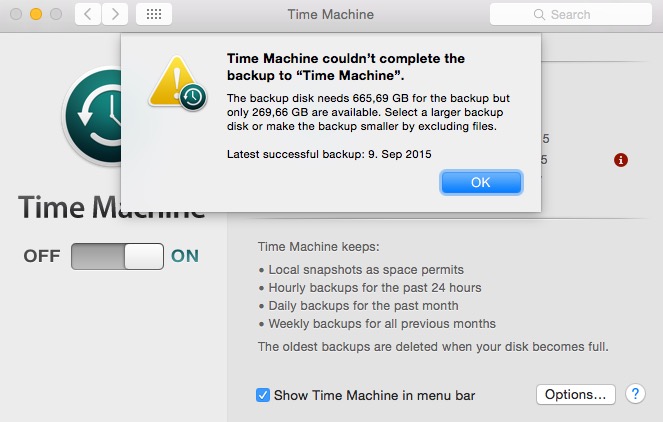 The only reason to move on would be to delete my current backup and start a completely new one, which I don't really want to do as it is my only full backup on the harddrive.

What advice do you have from here?

1
Can I use 2 harddisks to backup using time machine (not duplicate, but to extend)
1
Time Machine Backups are incredibly slow, not doing what they should
1
Does Time Machine change file permissions while doing a backup?
10
Moving Time Machine backup between two local disks results in full backup instead of incremental
0
Combine Time Machine backups in Mojave