First off, I'm using a manufacturer (Apple) refurbished AirPort Time Capsule, the newest model, which was delivered by UPS a few hours ago to my new house. I bought it directly from Apple.

The technician from Hughesnet, which is satellite internet, finished installing the equipment (satellite dish, modem, etc.) earlier today. A tech support rep promised me speeds of at least 9 mbps, with the max being 15. Yet, I'm never able to get more than 7 or 8, nothing close to the already-slow 15 expected or even the 9 that the tech support representative promised.

My problem is that regular webpages (such as Apple, Wikipedia, MLB) all load reasonably quickly, yet I am never able to download iOS 9. After a few minutes, iTunes on my MacBook Pro (mid-2009, running OS X 10.10.5 "Yosemite") will have about "1024.0 KB" downloaded, then the request will time out. The update doesn't seem to be downloading on my iPhone 5S, either, but it downloaded part way on a relative's Wi-Fi network earlier this week.

I've spent literally hours on the phone with Hughesnet's technical support and we were finally able to prove that the modem is working properly and that the problem must be the router.

The Airport Time Capsule has been updated to the latest software. Both the router and the modem have been power cycled multiple times.

Is there something more that I can do to troubleshoot my Airport Time Capsule? Could this just be a problem with Apple's software update servers? 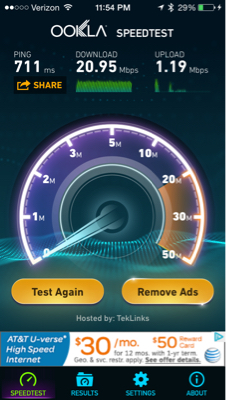 Is there something more that I can do to troubleshoot my Airport Time Capsule?

Your OOKLA speed tests indicate that your AirPort is working correctly.

Could this just be a problem with Apple's software update servers?

The best way to download iOS 9 is download though you computer. Connect your iPhone to your computer, open up iTunes (make sure you have the last version of iTunes), backup your iPhone and install iOS 9.

There is solution, that I just googled. Log off App Store, switch iDevice off for a while, then log into App Store back. I haven't tried it yet.

Not the answer you're looking for? Browse other questions tagged airport software-update internet .

0
How to add the Time Capsule to an existing network, in Ethernet?
0
Macbook connects to modem, internet works, but modem -> router, no internet
1
Problem with Apple Time Capsule Being Used to Extend a Wireless Network
0
Are wireless speeds on Laptop and iPhone the same?
2
iPhone wifi is half the speed of Mac when using an Airport Express
0
AirPort Time Capsule Connection to Internet
1
“Unexpected error” while extending Time Capsule with Airport Express
1
Airport Express can't handle multiple devices