I purchased this MDP-HDMI adapter, Cable Matters® Gold Plated Mini DisplayPort (Thunderbolt™ Port Compatible) to HDMI Male to Female Adapter - 4K Resolution Ready, hoping that it would help my situation, but my max resolution has not changed.

I'm wondering whether ordering this HDMI cable, AmazonBasics High-Speed HDMI Cable - 6.5 Feet (2 Meters) Supports Ethernet, 3D, 4K and Audio Return, will fix my problem. I don't know what version or whatever my current HDMI cable is.

I believe the problem is your HDMI cable - it's not capable of displaying a resolution of 2560x1080. In other words, it's pre-HDMI 1.4 specification. (Also, the link provided to the cable in the original question is out of date; it's no longer available).

Per Apple Support, the 2013 MacBook Air (11" and 13" model) has a Thunderbolt port which also supports mini Display Port.

Since the HDMI cable referenced in the original question is 4K capable (HDMI v1.4 specification), the cable is not the issue. What wasn't mentioned was the HDMI adapter. I believe this component to be the "weak link" in this chain because if the mDP to HDMI adapter isn't 4K capable, nothing else will matter.

I recommend getting an active mDP to HDMI adapter (rather than passive) and then connecting your HDMI (v1.4 or above) cable from the adapter to the TV. 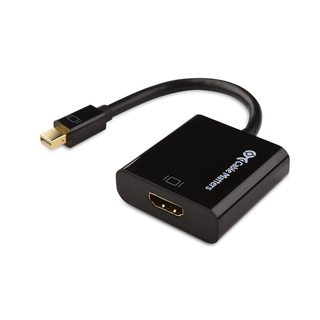 That said, I would only recommend this solution for this particular setup, because the LG monitor 29UM57-P only supports HDMI connections.

Ideally, you would want to use mDP to either mDP or DP connections rather than convert to HDMI, DVI, etc., to get the most reliable connection(s). Less conversions means less points of potential failure.

You might want to consider using one of the two mDP-HDMI adapters that Apple sells on their online store: in the US, at least, those are the Belkin 4K and Moshi.

If you have a Macbook Air from 2013 (possibly other models) and want to use an LG UltraWide monitor that is 2560x1080 @60hz, then this cable WILL NOT work for you. However, the following cable - "Cable Matters Active Mini DisplayPort to HDMI Adapter (Active Mini DP to HDMI) Supporting Eyefinity Technology & 4K Resolution" - https://www.amazon.com/gp/product/B00PJ3LSIG/ref=od_aui_detailpages00?ie=UTF8&psc=1 - works perfectly for the job. Hopefully this will save somebody some time!

I'm sure this particular cable is fine for the right job - I just had to rate it something, even though it wasn't right for my case.

People should only provide proven solutions instead of theories, theories are useless and frustrating, just shut if if you don't really know...

Here's what I learned after wasting tons of hours: the most similar version to your monitor by Apple was the 30" Cinema Display (because of the res.), if you go to the Apple page you will find out that you need a Dual-Link adapter to reach that resolution and this is because, since it's made for 2 monitors (Dual), it doubles the bandwidth. I didn't tried the Dual-link adapter, but following the same direction, I had a MST hub (with I could never dual-monitor my MBP with and the reason I take the ultrawide way...) so I currrently use only one of the two outs, and it worked absolutely perfect.

Not the answer you're looking for? Browse other questions tagged hdmi display .