I want to have the codes of the project GUST in my OS X. Franck indicates here that the definite way is to download those fonts from there and install. However, I would like to find some packaged version because this is so standard tool. The fonts were removed from MacTeX 2015, while they were in MacTeX 2013. I could not find the fonts in homebrew.

giving font-not-found error. Disabling the line \setmathfont{Latin Modern Math} gives the bad arrow which I do not want to have:

I downloaded the fonts here from the GUST project. I added the fonts to my system by opening fontbook and adding there the fonts directly. However, there is no Latin Modern Math in the package: 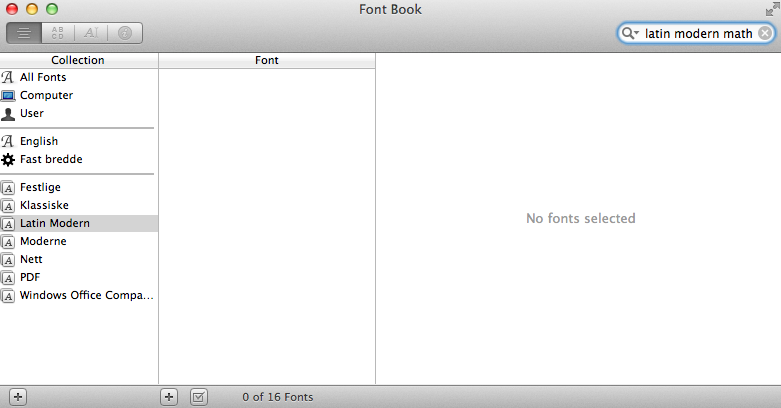 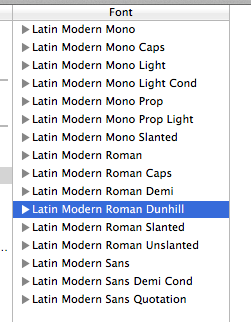 How can you install Modern Latin Math font in OS X?

I've also noticed The Latin Modern fonts are not installed to OS X with the MacTeX2015 distibution.

To use these font's throughout OS X there is no need to reinstall them, you can link these fonts to your Fonts in OS X as follows:

Note: This was inspired by the comments on this question.

Not the answer you're looking for? Browse other questions tagged macos install homebrew font .

7
How does the OS X font fallback system work?
3
How to change fonts picked by Terminal.app to display languages other than English?
0
What are these 𝖬𝖠𝖳𝖧𝖤𝖬𝖠𝖳𝖨𝖢𝖠𝖫 characters, and how can I use them?
3
How to install bitmapped *.fon and *.bdf fonts on Lion?
0
Combining CharacterViewer with FontBook in Yosemite
2
What is the "128 font limit" in classic Mac OS?
4
Change equation font in Pages
0
Unable to type Tibetan Monlam font in Pages and Microsoft Word 2019