On previous versions of OS X, desktop thumbnails were showing by default in the Mission control.

In El Capitan, however, they are collapsed by default and only the names are showing (i.e., Desktop1, Desktop2, etc.). I have to place the mouse pointer onto them to expand it and see the thumbnails.

Is there any way I can get the previous behaviour back?

Edit 1/30/16: After using a few different options in my daily workflow over the past few months, I've settled on almost exactly the solution proposed by @Arctus. Despite requiring a 3rd-party program, BetterTouchTool (BTT), I believe it to be the best current option.

See @Arctus's answer for the general method and a helpful screenshot. Here are the specifics that were missing from that post:

You'll probably notice that BTT actually has a predefined action called "Mission Control & Immediately Show Desktop Previews". Unfortunately, it has an annoyingly long delay between opening mission control and expanding the desktop previews that made it unusable for me. This custom solution is very smooth, very consistent, and doesn't seem to cause any undesired behavior.

The other main variation of the BetterTouchTool method is to use either the top-left or top-right hot-corners to open mission control and then to use BTT to move your mouse to the corner and back upon your chosen gesture. This allows other gestures besides 3- or 4-finger swipe up, but it introduces a hot corner that you may not want. I found that I was triggering the hot corner accidentally far too often for this to be a viable option for me. Again, YRMV.

I'm not an expert at BTT by any means, but if anyone has any questions, I'm happy to try to help. Good luck!

The reason for this is that Mission Control serves two functions:

An Apple rep I spoke to told me that that the motivation behind collapsing the thumbnails when opening Mission Control from a Desktop Space was to provide more screen real-estate to the all-open-windows view and to reduce clutter. When opening Mission Control from a Fullscreen App Space, the focus changes to the all-open-windows view for the most recently viewed Desktop Space and the thumbnails are expanded (unfounded speculation: presumably this is because for Fullscreen App Spaces, there are no other windows in the same Space, so the only reason to open Mission Control would be to switch Spaces).

Any way to always show thumbnails by default?

The Apple rep also confirmed that there is currently no way to enable thumbnail expansion by default.

However, I did some research and tested out a few other answers and I've been able to confirmed some special cases that may be useful:

Like others here, I have submitted feedback to Apple for this issue. Here's the link if you want to do the same.

Yes, this is very annoying I submitted feedback at http://www.apple.com/feedback/macosx.html

I suggest everyone who agrees does the same as this is either a bug or design regression.

This still works, but bettertouchtools 1.24 has added a show mission control and immediately show desktop previous which works pretty much perfectly.

I managed to get around this for the time being using BetterTouchTools. Specifically I've set my 3 finger swipe gesture to move the mouse to the top of the screen and back again. It's seamless enough that I don't see the mouse actually move so it'll do for now.

Meanwhile I too have submitted feedback to Apple about this change.

It does seem like they're pushing everyone to use their fullscreen feature which does automatically expand the spaces bar when Mission Control is opened from a fullscreen application/desktop. But many of us BetterTouchTool users specifically don't like the way OSX's fullscreen feature operates and therefore don't use it.

If there were an option for the default fullscreen feature to always show and not hide the OSX menu bar I'd probably get used to it. Options are good :)

Developer Brian Kendall has created this for restoring the old behaviour: https://github.com/briankendall/forceFullDesktopBar

It injects code into the Dock process to call the method that shows mission control with the showFullBarparameter set to true. So while it's a hack, it's a pretty clean one that works well for all the different ways to activate mission control (e.g., I use a keyboard shortcut, 2-finger tap on magic mouse, and 3-finger swipe up on trackpad).

It's puzzling why Apple didn't include this setting as a preference when it's that simple.

Although BetterTouchTool (BTT) now has the "Mission Control & Immediately Show Desktop Previews" action that you can assign to a trackpad gesture, there is an annoying delay between when mission control starts and when the desktop previews are displayed.

I've stumbled onto a macro similar to, but slightly different from the one suggested by @Arctus, that gets me back to nearly the same behavior as in Yosemite.

Step one is to enable the upper left "hot corner" to show mission control.

Step two is the following macro in BTT:

EDIT: You also have to have the standard trackpad mission control gesture set for either three or four finger swipe up (doesn't seem to matter which). 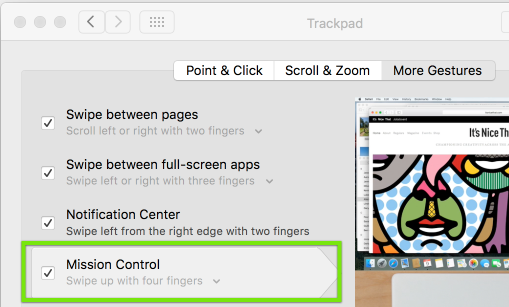 Playing around, I've learned that thumbnails are only displayed when the user switches to mission control while having a full screen app active.

If you use multiple monitors, all the screens must have an application running in full screen mode enabled.

So for the time being, try to have a full screen app on all monitors.

I found some kind of workaround. When you have lots of spaces they will be shown as expanded thumbnails even if Mission Control is launched from regular Desktop.

A friend of mine who has the 10.11.4 beta said this implementation is coming back. It would be nice if they made this a preference. Here is the screenshot he sent me: 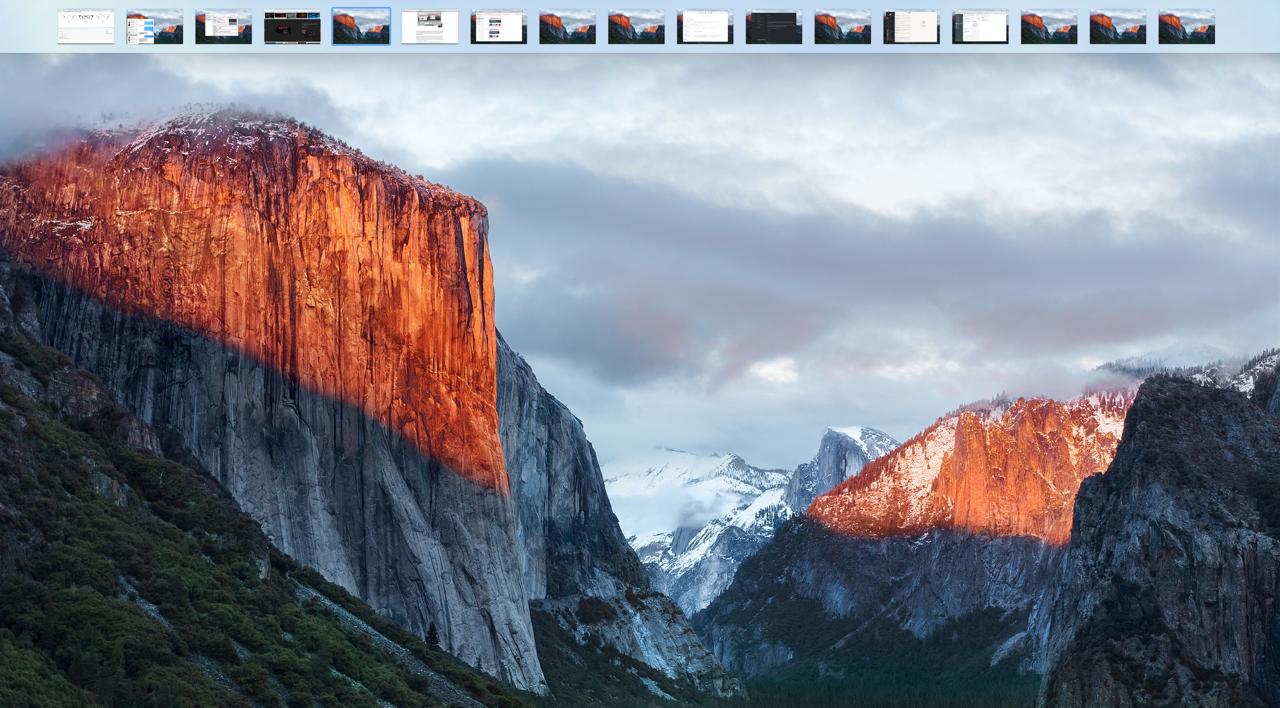 Edit: This information is incorrect. Mission control shows thumbnails instantly when there is a large number of spaces.

To follow up on Kevin C.'s answer, the author of forceFullDesktopBar has created a new version, https://github.com/briankendall/missionControlFullDesktopBar, which works on 10.12+. It was a bit involved to install but works great for me -- the only solution I've found that has no delay at all!

Okay guys, I have a quick workaround for High Sierra that will restore the old behavior without third party tools, or gestures that don't feel right. HOWEVER, you'll need to be connected to an external monitor. Here's what you do:

1) In Preferences>Mission Control, turn on "Displays Have Separate Spaces" (I don't know if this is necessary, but I'd have to log-out to test this)

2) On the external monitor, fullscreen whichever app you have on there

3) Tada! Now all your monitors' spaces are expanded into thumbnail view by default, even the ones with only 2-3 spaces.

You can choose to make fullscreen in whichever monitor you want, probably one that's not your main. You have to keep the app on the external monitor fullscreen in order for the other monitors to have thumbnail spaces previews.

This is an old post, but I just hope I can help someone else by sharing.

I am using a simple combination of cliclick and skhd. cliclick is able to manipulate mouse cursor, while skhd is able to send arbitrary shell commands with keyboard shortcuts.

Note that my setup is for something who does not use a mouse. I use yabai and skhdrc to minimize the dependency of using a mouse.

You can also refer to my .skhdrc

In addition to pjv's and Arctus' answer, I found the temporary mouse coordinate of (0,0) to not reliably trigger the spaces preview. Half of my display resolution on the x-axis and a little deviation on the y-axis are working fine, though. On my MacBook Air with a 1440x900 resolution, (720,25) is a robust setting.

To throw another hat in the ring for Better Touch Tool, it looks like they now provide this action right out of the box:

missionControlFullDesktopBar works great on High Sierra. I have it working with Hammerspoon to intercept Mission Control (F3) keypresses, video of it working here, see my full hammerspoon config here:

Not the answer you're looking for? Browse other questions tagged mission-control macos .