Why does leaked memory appear malloced to kernel_task, and why can't OS X therefore garbage collect it

I have previously been told that a sign that some application has a memory leak is that kernel_task has a large memory footprint, commonly on the order of gigabytes. If an awry kext was causing this memory usage, we would expect to see a discrepancy between the allocated memory and those expected to be allocated, i.e.

would return something other than the words 'Wired' and 'Name'.

Whilst writing my thesis, I have noticed that changing a pdf whilst it is open in Preview often causes bad things to happen: occasionally, the memory usage of kernel_task can grow to around eight gigabytes, or more. If I kill preview, it returns to normal, instantly. So, obviously something is wrong -- and Preview is leaking memory under these conditions.

So, my question is this: if I know that a process has leaked ram via a sudden and unexpected increase in the footprint of kernel_task, why can't OS X know that something has gone wrong. If killing Preview restores my missing malloc()'d memory, why doesn't Darwin do garbage collection automagically for me?

Do I have a fundamental misunderstanding of how memory management works?

Here's a demonstration of what I'm talking about. First of all, I notice high memory usage by kernel_task (note Preview is open, just visible at the bottom of Activity Monitor, using 333 MiB of ram): 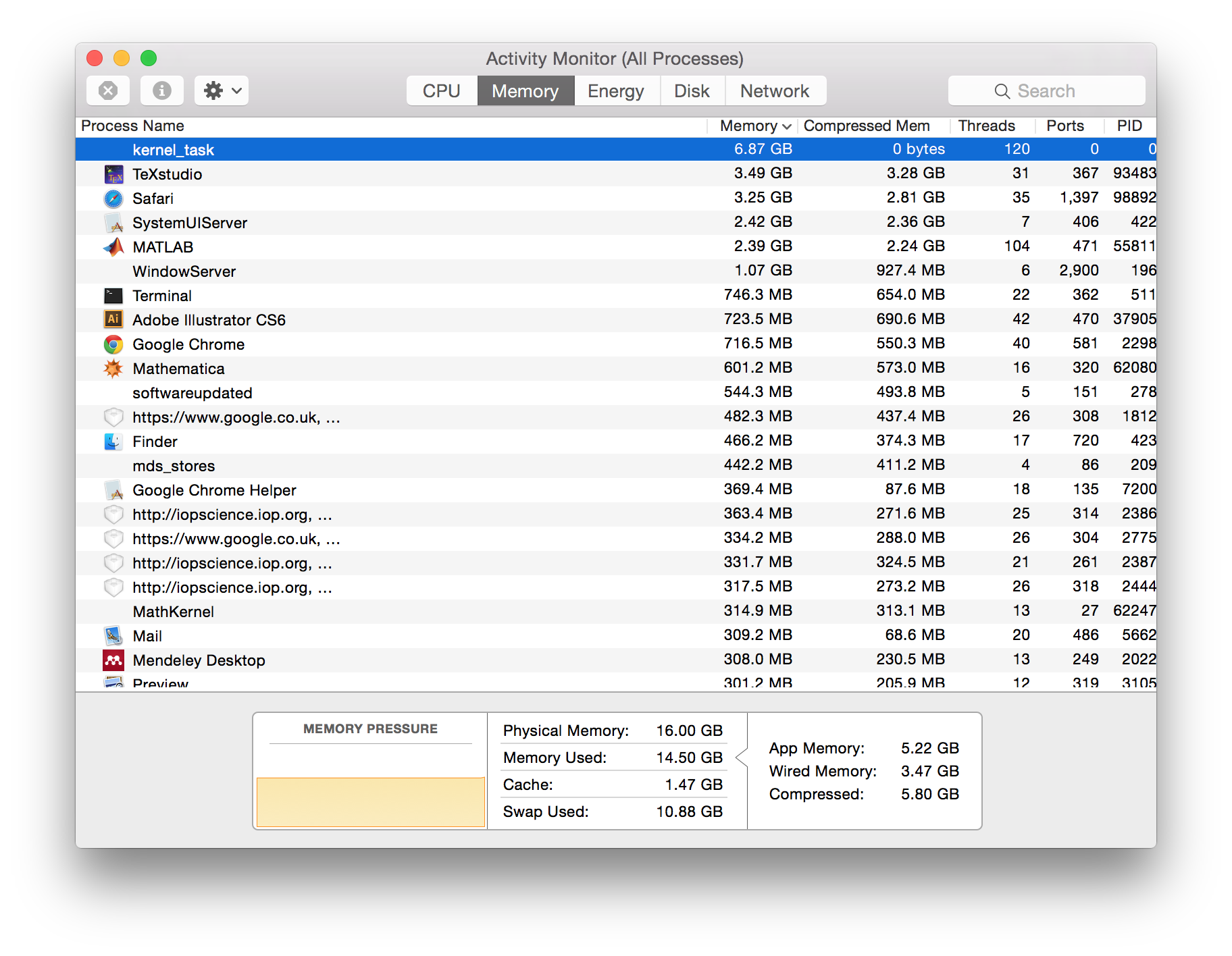 Following the helpful remarks by Ashley below, let's find out how much each kext is using:

So, not a huge amount. My machine has both discrete and integrated GPUs; their drivers are only using a few MiB of wired ram. On my hunch, let's kill Preview, and look what happens to the memory footprint of kernel_task: 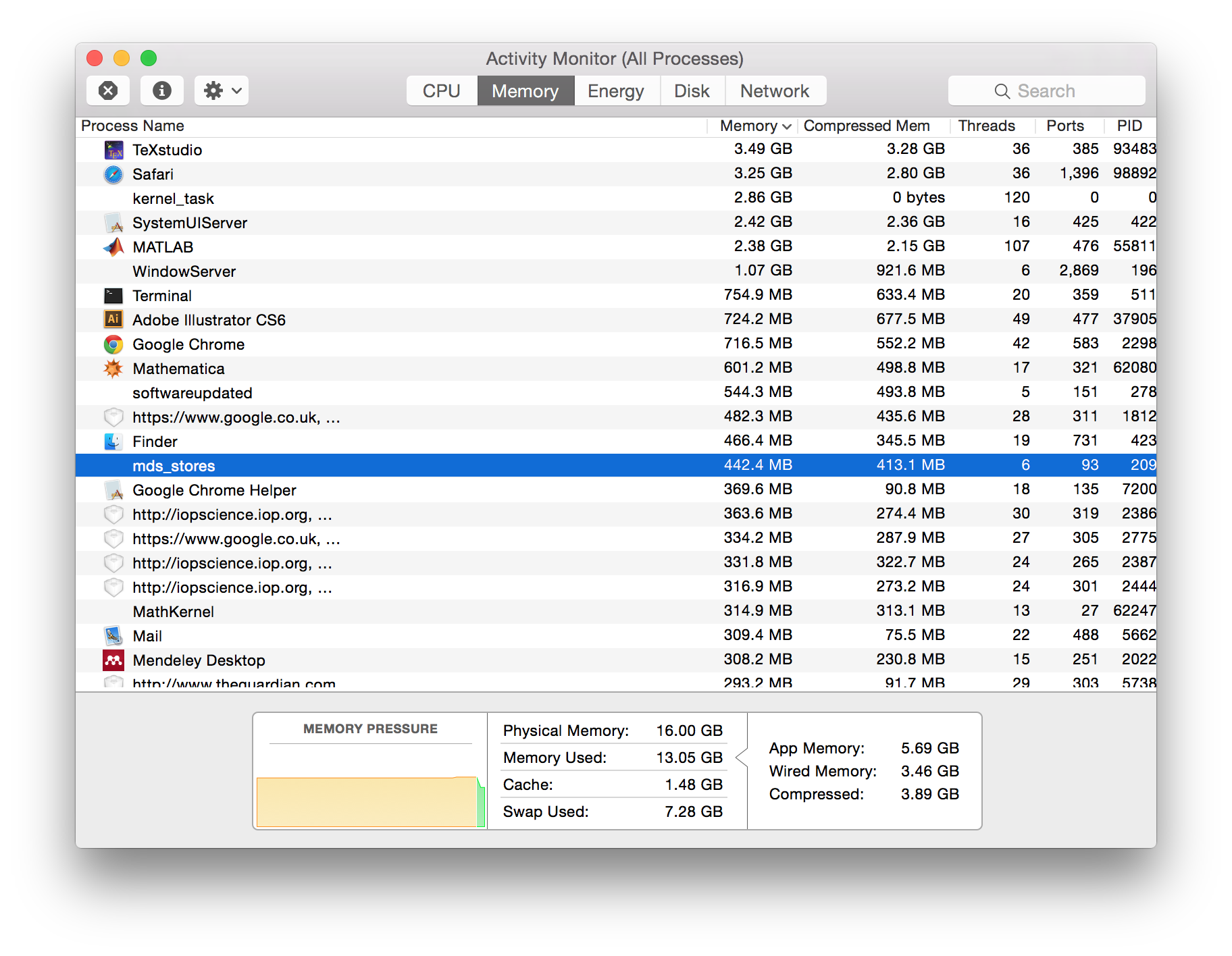 Preview's gone, and the memory footprint of the kernel has gone down dramatically. There's still no evidence of a change in kext usage: the output of the above command is unchanged.

Edit: Bug reported as No. 22701036. I am still waiting for a response from apple. There's nothing particularly interesting if you inspect the process in ActivityMonitor, but maybe I'm missing something.

The core of OS X is not garbage collected; IOKit's libkern C++ Runtime requires developers to manage their own memory.

From How does memory management work in Mac OS X?

Apple documents the lowest levels of the Mach Kernel and the virtual memory subsystem fairly well on the web as part of it's developer documentation.

Since that kernel was developed by Carnegie Mellon University, you can find dozens of papers describing it quite easily.

Bugs within OS X will be leaking memory. Given the size of the code base, this is almost certain.

Please report reproducible bugs directly to Apple. Every bug report helps and maybe your example will be the one that helps Apple's engineers pin down the cause.

When you have your thesis open in Preview, graphics card memory is used to hold the image ("texture") of the Preview window, and perhaps also some off-screen-but-decoded pages from the thesis.

I'd guess that you are intermittently seeing a bug in the graphics card driver and/or Preview, which isn't releasing system memory correctly when Preview reloads your thesis PDF. (However this bug is mitigated by OS X / the driver correctly releasing the memory when Preview quits.)

You could try looking at the output of kextstat and see if the numbers in the Size column increase when you experience the issue. My theory is that the 8GB increase you mention will be due to the graphics card driver.

The following command (from a comment on this related and interesting answer) sorts the output of kextstat to make it easier to see which kext is using the most memory (although note this sorts by the Wired column... there's a similar, simpler incantation in this answer with an explanation if you'd like to tweak this).

Not the answer you're looking for? Browse other questions tagged macos memory kernel memory-leak .

13
How does memory management work in Mac OS X?
5
How can I identify files and programs connected to the kernel_task process in Mac OS?
2
30GB out of 32GB being used for wired memory?

1
On OS X Mavericks, why does it always say my memory used is like 99% of my total memory?
1
kernel_task consuming a lot of memory, can't finish my computations
6
Why does OS X use swap memory when memory pressure remains low?
2
Why does memory appear near full even after upgrade?
149
How to investigate high kernel task memory usage?
3
Why does the iMac not allow memory parity error checking?
2
kernel_task and mdworker use all available RAM memory
5
Why is "Real Memory" greater than "Memory" for kernel_task process?
1
macOS Catalina RAM usage - 2GB at boot?