What does the 'Special Paste' menu item in Xcode do?

On my system it's disabled most of the times.

It's a fairly obscure and hard to find official documentation covering it feature of the OS X pasteboard being capable of storing several presentations of object data on several pasteboards.

Basically, you can have multiple items in a pasteboard and they are object oriented - so for image if you have copied an image - there is metadata that you could paste - especially when the image itself isn't passable into a plain text document.

When you have a png image in your clipboard, the "special" is renamed:

I presume there are all sorts of items you could have "special" aspects of which to paste into an Xcode document in addition to the name of an image, especially if an UTI is defined for that object: 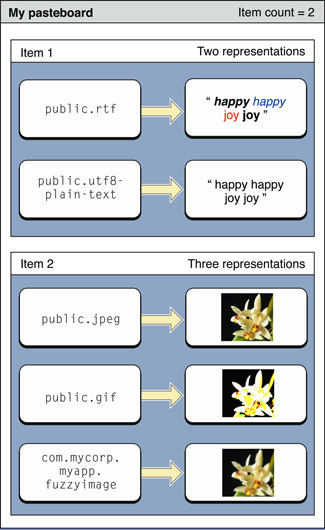 Not the answer you're looking for? Browse other questions tagged xcode copy-paste .

0
What is the quickest way to setup Instiki on Lion?
22
Screen Sharing won't allow me to paste into remote system
0
I uninstalled xcode 4.6 and the App Store still wants to update it
17
What is the relationship between Xcode and Xcode command line tools
7
Can't paste into Xcode
2
Uses for Force Touch in the Xcode editor
0
The operation can't be completed because the item is in use …
1
Paste image from the clipboard into a PDF in Preview